An enchanting version of the familiar tale, Act II Playhouse’s Driving Miss Daisy serves up a delightful cast and a pleasant story that both challenges and charms. Originally written in 1987, Alfred Uhry’s script examines the relationship between an elderly white Atlanta Jewish woman, Daisy Werthan, and the African-American man hired to be her chauffeur, Hoke Colburn.

Uhry’s plot efficiently spans the years between 1948 and 1973, allowing the relationship between Daisy and Hoke, although tumultuous at first, to really blossom and shift around the ever-changing times. They struggle with trust, propriety, money, and service over a number of decades where the dynamics between black and white Americans altered dramatically.

On familiar ground, a number of Uhry’s works are also focused on Jewish families in Atlanta, including The Last Night of Ballyhoo and the book of the Jason Robert Brown musical, Parade. Although Uhry does not address Civil Rights aggressively, the undertones of the era are inescapable, and kept fresher by the presence of vintage newscasts throughout the production, directed by James J. Christy, coming from the radio on Miss Daisy’s end table. What results is a considerate look at the racial tensions, and eventual affections, between a woman of means and the man who is paid to assist her.

It’s hard to go wrong with a stellar cast like this. Carla Belver plays the precocious Miss Daisy with fervor, balancing her stolid and fragile sides and aging with a heartbreaking grace as the play progresses. By her side is Brian Anthony Wilson as a genial and tender Hoke, with a booming presence and jolliness. He cares for his employer with a bittersweet gentility, able to perform his duties with care, but still with the distance their shifting social positions demand as time passes.

Rounding out the plot’s moving parts is Tony Braithwaite as Daisy’s son Boolie, a perfect Southern businessman and the matchmaker for this odd couple. Braithwaite’s knack for humor keeps the production light on its feet, and the entire ensemble plays well off each other whether in jest or in conflict.

Daniel Boylen’s layered scenic design provides a wonderful canvas for the many locations as well as a meaningful message connected to the play’s most poignant moments, matched well with James Leitner’s soft lighting design. Frankie Fehr’s costumes are agile, quickly shifting to match the changing times and settings where necessary and giving each character their own distinct strength. John Stovicek’s sound design wonderfully connects the many small scenes with music to fit the mood and environmental sounds, especially present in the driving scenes.

The well-known story of Miss Daisy and her charming chauffer finds life in this production at Act II Playhouse. The racial conflicts, while tempered, are still relevant, and highlight the passage of time, both in how much things change and how they still manage to stay the same.

A captivating telling of a quaint story by a sturdy cast makes Act II Playhouse’s Driving Miss Daisy a pleasure. 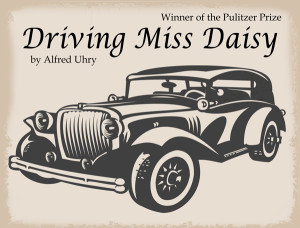