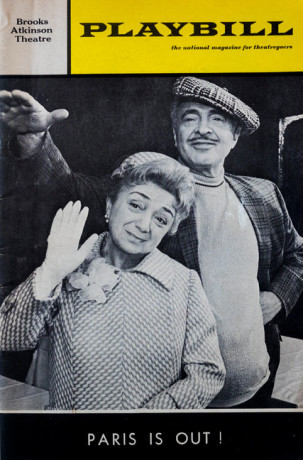 In yesterday’s NY Times, Michael Paul’s article called For a Young Donald J. Trump, Broadway Held Sway talked about how Donald Trump dabbled in becoming a Broadway Producer when he invested in DCMetroTheaterArts’ Richard Seff’s play Paris is Out!

Here’s a Synopsis of Paris is Out! from Richard Seff’s website.

“Hortense and Daniel, a married couple of over 40 years, plan to embark on their ﬁrst European vacation, but the two have very different outlooks on travel. Daniel is convinced he will be unimpressed by the other side of the pond. His conditions for the trip are: no Paris, no Venice, no shopping, sightseeing, or speaking in French. Hortense, on the other hand, is full of life and eager to experience Europe fully. When Daniel embarrasses Hortense in front of family and friends, she announces that the trip is cancelled. As her adult children try to convince her to forgive Daniel, Hortense must decide how she feels about the man with whom she has shared a life for 40 years. Daniel, in turn, to save his marriage must show how much he appreciates Hortense. PARIS IS OUT! is a witty and heart-wanning comedy about the triumphs and struggles of a lifelong marriage.”

“The audience gave every evidence of loving it!”

“The audience around me was laughing hysterically.”

“The audience nudges each other in delicious recognition!”

“Paris is Out! is as rich and delicious and filling as a large helping of apple strudel.”

RICHARD SEFF has been working in theatre since he made his acting debut in support of Claude Rains in the prize-winning DARKNESS AT NOON, and he agreed to tour the next season in support of Edward G. Robinson, which took him across the nation and back for nine months. When it was over and he was immediately offered another national tour with THE SHRIKE with Van Heflin, he decided to explore other areas, and he spent the next 22 years representing artists in the theatre as an agent, where he worked at Liebling-Wood, MCA, eventually a partnership of his own called Hesseltine-Bookman and Seff, where he discovered and developed young talents like Chita Rivera, John Kander, Fred Ebb, Ron Field, Linda Lavin, Nancy Dussault, and many others. He ultimately sold his interest to ICM. When he completed his contractual obligation to that international agency, he returned to his first love, acting and writing for the theatre. In that phase of his long and varied life, he wrote a comedy (PARIS IS OUT!) which brightened the 1970 season on Broadway for 107 performances. 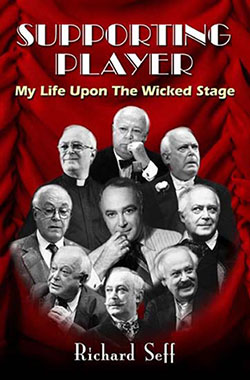 He became a successful supporting player in film, tv and onstage, and ultimately wrote a book about his journey, SUPPORTING PLAYER: MY LIFE UPON THE WICKED STAGE, still popular with older theatre lovers and youngsters who may not yet know exactly where they will most sensibly and profitably fit into the world of show business. The book chronicles a life of joyous work working in a favored profession in many areas, including leading roles in the regional theatres in his work in Lanford Wilson’s ANGELS FALL. His last stage role was in THE COUNTESS in which he played Mr. Ruskin for 9 months off Broadway. 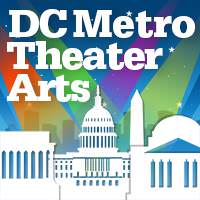 Five seasons ago Joel Markowitz suggested he join him at DCTheatreScene. His accurate and readable reviews of the New York Scene led, when the time was right, for his joining DCMetroTheaterArts to continue bringing news of the Big Apple’s productions just to keep you posted. He is delighted to be able to join DCMTA and work with Joel and hopes that you like what he has to say. 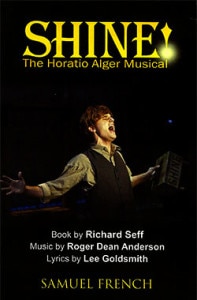 SHINE! is a musical based on material and themes found in the works of Horatio Alger, America’s best selling author, all of which deal with the American dream. His readership, which was vast, was comprised  primarily of the first generation Americans who were beginning to build their lives and this country by hard work, application, a positive attitude with some luck tossed in to help.

SHINE! was last seen on its feet in a Workshop production at NYMF (the NY Music Theatre Festival) where it received unanimously positive reviews, won two prizes, and launched the career of young Andy Mientus in the leading role (he’s since been seen in Smash on TV, in the revivals of Les Miz, and Spring Awakening). The delightful score is by Roger Anderson and Lee Goldsmith; I wrote the book and they have been published by Samuel French and recorded by Original Cast Records.

We await that producer with vision to get us back onstage, where we belong.” Richard Seff