In life some things that are easy look hard and others that are hard look easy. That’s also the case for choreographer and dancer Monica Bill Barnes, whose party-cum-commentary on masculinity and femininity, success and failure, connection and anonymity, among other things, brightened up the drab Terrace Gallery setting, upstairs in The Kennedy Center March last night. The small but mighty Monica Bill Barnes & Company has taken it upon themselves to spice up people’s lives with playful but pointed in-jokes that provide layers of depth and insight. What on the surface seems like simple off-the-cuff unplanned sequences, is far, far deeper.

Barnes and Ann Bass, her associate artistic director, fellow performer and partner in crime, champion the underdog while culling from a tastefully curated selection of American dance styles, mainly jazz, theater dance, tap and a tad of ballet and modern thrown in. But it’s not so much the steps and choreography –which are themselves often a hoot, smartly selected and dazzlingly performed – but the way they attack the movement. There’s a sense of going all out and over the top, of dancing for life itself. Sometimes Bass’s neck strains, or Barnes’s eyeballs pop, as droplets of sweat form on their brows and they fling themselves completely into quick, goofy phrases that look so easy yet are anything but. They’re working their hardest for our pleasure. You can’t help loving them for their all-out effort, especially in a workaholic town like metropolitan DC, where the only right answer to “how are you” is “busy, way too busy.”

Happy Hour starts with the conceit of the title. The Terrace Gallery is set with 30 cocktail tables. The company reportedly ran out and bought $200 worth of snacks – microwave popcorn, a box of Cheerios, an extra-large size of gummy vitamins, mini candy bars and a tub of pretzel rods. The room is decorated in a baby blue balloons and crepe paper streamers hung like a six-year-old’s birthday party. Robert Saenz de Viteri acts as the MC and maitre d’ for a “pre-show” that is as much a part of the performance as the dancers, handing out snacks from a rolling production cart artfully labeled “Production Cart” in glitter. He works the crowd getting to know his audience, milking them for self-deprecating laughs. A karaoke machine stands at the ready waiting on the brave few in the audience ready to take a turn with pop classics like Neil Diamond’s “Sweet Caroline” and Sonny and Cher’s “I Got You Babe.” There’s a raffle, someone is celebrating a birthday, another couple is visiting The Kennedy Center for the first time. This happy hour is a real piece d’occasion and Saenz de Viteri works it with finesse.

Unexpectedly, after the buildup and the snacks, Barnes and Bass slip in, decked out in well-fitting menswear – crisp white shirts, sharp suits black (for Barnes) and gray (for Bass), their hair slicked back. They’re mobsters maybe or madmen. Their shoulders squared, jaw lines taut, when they walk there’s a touch of masculine swagger, their hands pushed deep into their pants pockets, a look of bored indifference darkening their faces. They proceed to parse through a playlist of 20th century pop hits, from John Mellancamp’s “Hurts So Good” to Elvis Presley’s “Love Me Tender” to Judy Garland singing “Come Rain or Come Shine” and to Nat King Cole smoothly covering “Smile” (when your heart is breaking).

As the music elicits nods of recognition in the audience, Barnes and Bass attack the songs with a variety of jazz and tap and show business-y moves layered atop emotional moments read clearly on their faces. There are homages to the tap dancing greats the Nicholas Brothers, and to the smooth and easy going Gene Kelly, and suave sophisticate Fred Astaire, each subtly drawn in the quick steps and lanky runs, the syncopated step-ball-changes and the vaudeville like kicks performed with exaggerated smiles. There’s military precision and honor in the way these two attack their phrases, they look simple but are complex rhythmically and technically – quick little steps packed together all in a row. They’re dancing at the top – nay, over the top – of their game.

But what’s most riveting are the small vignettes – the emotional moments — where these women, dressed and behaving as men, interact, try to pick up women from the audience, cheer each other on, muddle through tense moments, hug and make up. Bass has a habit of pulling a silver flask from her pocket and taking a swig. Barnes is the more sensitive one, the underdog, who pulls out a deck of cards and tries and fails at card tricks. No matter, they serenade each other, applaud one another on, gin up approval from the audience then take elaborate bows, accepting bouquets of flowers, like Olympians or Russian ballerinas.

It all looks ridiculously simple, but every moment, every movement, each twitch of an eyebrow or tug at a shirt, is planned and telescopes meaningful messages about friendship, gender, heartbreak, and perseverance, not only in the face of failure, but also, even more important, in the face of ordinariness. Happy Hour is about elevating the ordinary to high art. Buying supplies at the local drug store for a performance at The Kennedy Center, taking old steps and making them fresh and new, culling from pop classics but finding new statements or highlighting their meanings in new ways – this begins to get at the depth of Happy Hour.

So Happy Hour breaks all the rules of theater, including that fourth wall into the audience, and it offers not merely terrific entertainment, but more than a measure of poignancy, a sense of loss even amid the fun-and-games.

Unexpected life lessons told in subtle and magnified gestures reveal striving, doing one’s best, understanding the desires of the opposite sex and more. As much as this daring and dynamic duo want to be heroes, become the life of the party, their eyes and their physical hesitations show us that painful poignancy of not living up to ideals or dreams, either one’s own or those imposed by others.

But MC Saenz de Viteri finally brings us down to earth and back to reality when he returns with a huge birthday sheet cake, inscribed to the audience member with the birthday. It’s a surprise, a deux ex machina if you will, and, finally, a sweet moment after the heavy duty food for thought that Barnes and Bass served up. 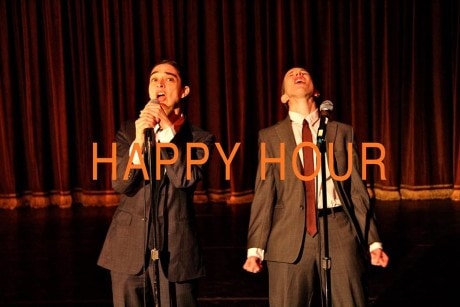