Recipes for the Good Life. That’s actually the title of a cookbook written by the legendary Godmother of Soul, Patti LaBelle. 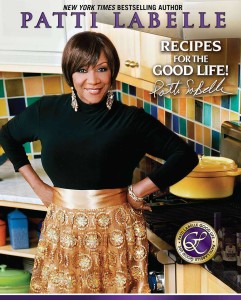 It’s also a metaphor for a music career spanning more than half a century; and testament to a life well lived by the iconic singer, author, actress and humanitarian. The two-time Grammy Award winner added another shining light to her list of accolades as the (GWUL) awarded Ms. LaBelle its Lifetime Achievement Award.

Along with other celebrated “Unsung Heroes” at its 44th Annual Whitney M. Young, Jr. Memorial Gala fundraiser on Friday, evening at the Omni Shoreham Hotel, Washington, D.C., Patti LaBelle was both headliner and honoree as she roused a black-tied crowd into a looser version of themselves during a festive full performance concert. They gave a standing ovation to the incomparable “Miss Patti” for her song and her service to the community.

A group of energetic teens, the “Urban Nation Hip Hop Choir,” opened the presentation with Michael Jackson’s “Man in the Mirror” and added snazzy synched choreography to their lively performance of “Shining Star.” It was truly inspiring to see this group of young people, along with a slate of young scholarship recipients, embrace the Greater Washington Urban League’s mission to impact the lives of the lives of communities in the greater Washington area. For the past 78 years, the GWUL has worked to “increase the social, economic and political empowerment of blacks and others with diverse backgrounds.”

Svelte in a black flapper-fringed mini-dress, Patti LaBelle sounds and looks as good as she did when she came on the music scene back in her girl-group days with Labelle in the 60s. It’s hard to believe that she’s 71 years old and has been singing for 52 years. But in her own words, “It’s not about the money because I don’t need money, but I need to sing. With a voice or without, I’ve got to get on that stage.”

Patti LaBelle is most definitely still with a voice and her knockout performance at this gala event of oldie R&B and pop favorites, gospel soul stirrers disco funk, and deep ballads made for a refreshingly new walk down memory lane.

“New Attitude” had us dancing in our seats even though Patti’s been singing it for many years along with most of her play list for the evening. Ever the consummate pro, she sings every song as if for the first time. Patti LaBelle performs with an infectious big smile on her face and it’s easy to see that she loves what she does for a living. She threw in several tunes made famous by others, some of which she collaborated with, such as Michael McDonald on “I Keep Forgetting” and “If You Don’t Know Me by Now,” a Harold Melvin and the Blue Notes chart topper. Patti gave a funky rendition of “Love and Happiness,” an old Al Green favorite.

Patti LaBelle also performed a Gospel medley adding the spectacular voices of backup trio solos. No egotist, Patti eagerly showcased the marvelous voices of her backups and talented band guitarist, Alex Sands. She gave them full center stage solos that added a WOW factor to the whole concert. Deborah Henry, Anthony Williams, and Brian Winbush gave smashing performances and were each a force unto themselves.

“Lady Marmalade”, the first hit from Patti’s days in Labelle, is still alive and well and she can still bring out the “voulez-vous couchez avec moi?” in a house. Patti had four male volunteers from the audience join her onstage for a hilarious sing-along to this tune about a New Orleans seductress.

Wrapping up a wonderfully entertaining evening, Patti gave a memorial tribute to celebrated personalities in music, the stage and political life including several of her own family members who have passed away. In a warm-hearted performance of “You Are My Friend” with photo-clipped projected visuals In Memoriam, Patti recognized, through song, the many who have graced her life and our lives through their lives.  She encored with her beloved performance of “Somewhere over the Rainbow,” not Judy Garland style, but with the distinctive phrasing that the inimitable Ms. Patti LaBelle still belts out after all these years.

The entire evening flowed together seamlessly beginning with the silent auction reception, elegant sit-down dinner, “Unsung Hero” acceptance speeches and Ms. LaBelle’s climaxing concert. The only challenges to the evening were a 7-piece band that sometimes played enthusiastically too loud leaving one to strain to hear the remarkable Miss Patti. 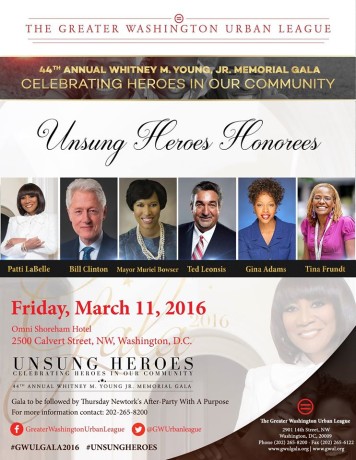 Also, the press met with unexpected surprises in terms of a long evening that began with a 6:30 pm reception for red carpet guests and local dignitaries and Ms. LaBelle’s concert performance that started late and did not begin until 10:45 pm. That made for a long time standing around the ballroom, if a reviewer followed press packet media guidelines that stipulated“… media will not be seated for or served dinner.”

A more generous spirit might have bolstered the mood of an evening whose whole point was to spotlight an organization and individuals – “Unsung Heroes” – “who labor – many times in anonymity- making a difference by their selflessness and hard work.”

I think the media certainly falls into that category. A press table and a glass of water perhaps?

Patti LaBelle is still doing it both on the stage and off. She is truly an “Unsung Hero,” but in her case, she is a hero who, for a lifetime, happens to have sung very well indeed.