DC hearts its nerdlesque! Do a Doctor Who-, Game of Thrones-, or Walking Dead-themed show and the fanboys and girls are sure to show up.

I got a chance to chat with Maki Roll recently who has made a career of doing character-themed burlesque about her upcoming show Bump & Grimes II: A Burlesque Tribute to the Walking Dead.

Lucrezia: So what I ask everybody first time I chat with them – name, tag line and when and why did you get into burlesque?

Maki Roll: Maki Roll “The Cosplay Cutie Turned Burlesque Beauty.” I got into burlesque actually as an accident! Four years ago, I was a part of a zombie pinup calendar, and as a part of the promo tour we had a burlesque show. I did this horrible zombie girl number, but afterwards I felt great. I wanted to dig deeper and do more and so I sought out as many shows as I could and eventually I got my first gig at The Red Palace via Mourna Handful!

I believe so, yes!

This is the second Bump n Grimes – the first one was in a comic book shop. What was that like?

We did the last show at Fantom Comics and it was definitely a challenge for my fiancé and I. There was no stage nor DJ equipment, so we invested a lot of our time and money in getting equipment. My fiancé actually built a stage for the show. It was my first time producing as my own singular production, and the crew at Fantom went above and beyond in making sure both the performers and the attendees were treated well. We ended up packing the place. We had to deny people at the door, and that’s WITH people who bought tickets and didn’t show up.  We took a gamble and it ended up with a very wonderful partnership with Fantom. We definitely want to bring another show back there.

Oh cool! Another Walking Dead show or something else?

Most likely something else. We’ve been toying around with the idea of doing a Guardians of the Galaxy themed show, or any kind of nerdy show. It’s just extremely awesome to have a place so geared toward nerd culture to perform and with the combined Fantom patrons and seasoned burlesque patrons, it’s just such a perfect spot to bring nerdiness to life.

How much crossover is there between the cosplay and burlesque scenes?

I think to the outsider looking in, there isn’t much crossover but there are definitely elements of both that are interchangeable. When I’m creating costumes I try to keep in mind how easy it is to get out of them, in case I want to create an act for them down the line. Some of my costumes that I’ve made for burlesque have actually turned into full on cosplay. My Booster Gold burlesque costume is actually one of my most popular costumes on my page, which is completely baffling to me.

What’s been your favorite moment on The Walking Dead?

Hands down, when Michonne and Rick FINALLY hooked up in the latest season. I felt like there was a collective cheer that was heard all around the world when it happened.

Team Richonne all the way!

I think my favorite moment was when Michonne first appeared and saved Andrea. I remember yelling, “What the hell?!!” out loud!

Anything Michonne does is basically magic. Jim Dandy and I acted out the scene where Rick goes aggro and she cold cocks him with her gun. I think it was either a season or mid-season finale. So…we’re working on a way to add some Richonne to the show lol!

And you’re doing a Walking Dead show right after this in NYC ….?

I am! I will be performing in D20 Burlesque’s The Shimmying Dead as Michonne! This will be my second time performing with them and I’m extremely excited! We will be at The Parkside Lounge: 317 E Houston St. New York, New York!

What’s up next for the Chop Shop?

Right now my fiancé and I are working on producing a burlesque and variety show for Awesome Con, DC’s premiere pop culture expo in June. We’re taking it to The Black Cat main stage and the lineup is stellar. I’m excited for everyone to see what we have in store. 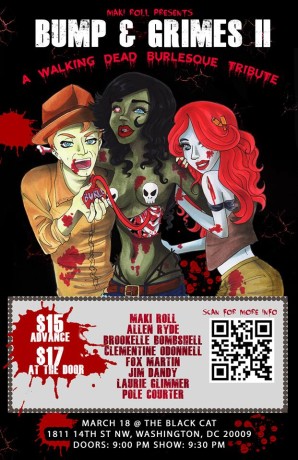