The Good Counsel Theatre Company (GCTC) tackled Into the Woods, with Lyrics and Music by Stephen Sondheim, and Book by James Lapine, this spring. The show is a famous mashup of fairy tales derived from The Brothers Grimm, showing what happens after happily ever after. Director Kristina Friedgen leads the troupe through this wildly entertaining show. 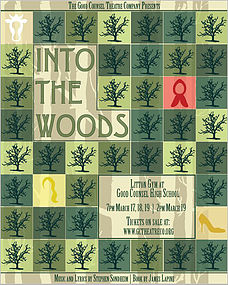 The show is an epic of sorts that tracks several famous fairy tale characters as they go into the mystical woods in search of everything from a golden slipper to enough money to feed their family. More well-known characters include Little Red Riding Hood (Schuylar Johns), Jack of Jack and the Beanstalk (Luke Amato), and Cinderella (Hailey Giddings) & Co. An ensemble show, Into The Woods focuses on the intertwining of these fairy tales in a quirky and adventurous way. While this story starts off in a lighthearted manner, following these characters’ on their paths to happily ever after, the story takes a dramatic turn as Sondheim reveals that not even fairy tales are as clear cut as you may have assumed.

There are many songs in the first act in Stephen Sondheim’s Tony Award-winning score. Many of the 19 songs have fun and clever lyrics, and they are all expertly performed by this talented cast.

The job of any orchestra is not an easy one but the hidden 11-piece orchestra, led by Conductor Dr. Richard Slocum, deserves congratulations. Although there is not enough time to go through every musical number, I have to applaud several actors for their musical feats. Seniors Hailey Giddings and Darien Williams (Cinderella and Cinderella’s Prince/Wolf respectively) in many ways stole the show with Giddings’s exciting talent for reaching out into the audience with her amazingly strong vocal abilities. Similarly, Williams’s portrayal of two characters that often get pushed to the side brought them to center stage. A sufficiently creepy Wolf and an agonizingly arrogant Prince Charming kept the audience laughing throughout the show. Although the cast seemed to be clumped together on stage in somewhat distracting ways during numbers that featured the whole company, most main ensemble members found their own way to stand out with only small issues during the Act I Finale: “Ever After.”

While the cast entertained throughout the first act, they really excelled post-intermission. Junior Patrick Ehrman had his best moment during his song “No More” as the dejected and defeated Baker. However, Ehrman was not the only actor to find his or her moment in the second act. Sophomore Cheyanne Parks showed off her lovely voice and strong performance ability as the Baker’s Wife during “Moments In The Woods,” making her death by giant even more crushing (as it were) for the audience. Throughout the play, Giddings’s Cinderella was much more down to earth than expected making me even more invested in what she had to say during her heartbreaking performance of “No One Is Alone.”

Overall the actors made the show work for them and deserved the applause received after the stirring finale number “Children Will Listen” which interestingly featured deceased characters, positioned in ways that suggested that in their deaths they had been absorbed by the woods themselves.

A quasi in-the-round seating arrangement allowed the audience to be spread around more than one side of the stage, thus freeing up the actors to have fun and orient themselves in a manner of ways. The production’s set and scenic design by Elizabeth McFadden, Kristina Friedgen, and Gina Sinha (constructed by David Petrocci) really sparkled as it found its footing in a very minimalistic style. The use of raised platforms as a means of separating the main ensemble members in their respective fairy tales worked magically, giving the separate stories worlds of their own.

One very interesting aspect of the show’s scenic design manifested in people—yes people. The trees came to life as actors in very weird (in the best sense of the word) black and white costumes held tree limbs, flowers, and various other props. The decision to animate the otherwise silent aspect of Into The Woods successfully gave the important character of the woods itself a material and fluid presence on stage. The actors that made up the trees interacted with the main ensemble, moving with the music and accenting blocking choices nicely. I thoroughly enjoyed the ever-increasing participation of the trees as the show went on, coming to a head during “Your Fault” as they directed focus to those being accused  in the moment, ending up in a confused disarray as the distinctions of who’s to blame become blurred.

Overall the set design and scenic choices although minimal, took center stage in my experience of this show. I, unfortunately, could not see very much of the far upstage portion due to my position in the audience, which granted is an almost unavoidable consequence of the interesting format of the stage. Perhaps some form of risers would assist those in the back to have the full experience of such an original set.

Another aspect of the design that caught my eye had to be the costume design by Rosemary Pardee Slocum. While I thought that everything from Cinderella’s ball gown drenched in sparkles to the Baker’s Wife’s simple rags added just what the show needed, I have to give my biggest appreciation to the suit worn by the sly Wolf (played by Darien Williams) as he plots his greatest meal. I feel it is important that I also shout out to the wonderful lighting design by Laurie Bautista and Jaclyn Troutner. From the Act I Prologue the design aspects come together to from a mystical world, underlined by a darkness that comes to light as the story continues on. 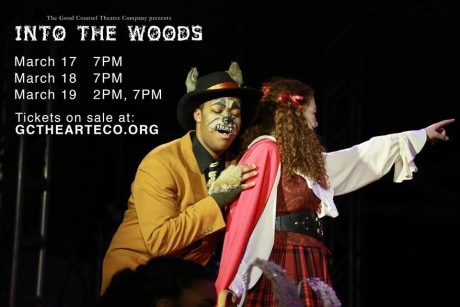 The audience’s moments in the woods were immersed in a metaphysical theatrical experience due to daring design and energetic actors. The Good Counsel Theatre Company should be proud of this production and I hope to see much more from these talented students in the future.

Kat Mullineaux is an English major and first year student at The University of Maryland at College Park. Her theatre experience over the past five years includes a wide range of positions including, but not limited to Production Stage Manager, Playwright, and actress over the course of fourteen different productions in and around the DC Metro Area. Kat enjoys and appreciates the backstage heroes that allow the show to go on in every production she has the pleasure of participating in or witnessing.