Shakespeare’s bloody history of Richard III, presented in a stunning production at People’s Light and Theatre Company, is filled with blind ambition, violent power struggles, and remorseless killings, with the end goal of gaining control of the embattled English throne. Director Samantha Reading sees in the story of the 15th-century King parallels to our own era (“TIME: Now/PLACE: Closer than you know”), as wars rage round the world, innocent people are slaughtered by madmen, a viciously contentious presidential campaign is waged in our homeland, and leaders on all sides insinuate that “Now is the winter of our discontent . . .” Some things never change, only the names, dates, and places are different; such is the universal significance of Shakespeare and the moral inherent in Richard III.

Pete Pryor, who won a Barrymore Award for Best Actor for his portrayal of the eponymous character in Lantern Theater Company’s memorable production of 2006, once again commands the stage in a superb tour-de-force performance. Charismatic and devious, increasingly volatile and blood-thirsty, Pryor swiftly hobbles up, down, and around the dilapidated multi-level space on metal forearm crutches as the physically misshapen, emotionally damaged, and psychologically deranged monarch—a “poisonous bunch-backed toad” and “lump of foul deformity.” His eyes twinkle with delight in his own treachery, as he tricks and manipulates his family, stalwarts, and enemies alike with false sincerity, then orders shockingly heinous deeds against them all, while placing the blame on others. It is a chilling, and award-worthy, portrait of a psychopath, laughably duplicitous, frighteningly ferocious, and thoroughly enthralling.

An eight-person supporting ensemble of company regulars and newcomers portrays multiple characters in Shakespeare’s complex narrative, with some cross-gender casting–Alda Cortese as both Margaret and Edward; Mary Elizabeth Scallen as Elizabeth and Tyrell; Peter DeLaurier as Hastings and the Duchess of York; Margaret Ivey as Lady Anne and young Edward—that aids in distinguishing between the personages (to lend further assistance, the program provides a genealogical chart and a list of factions in the War of the Roses and the Houses of Lancaster and York). Turning in especially powerful performances are Christopher Patrick Mullen as the Duke of Buckingham, an ill-fated henchman of the ruthless Richard, and Carl Clemons-Hopkins as the Earl of Richmond, who, at the King’s savage demise, proclaims with authority, “The day is ours. The bloody dog is dead.” 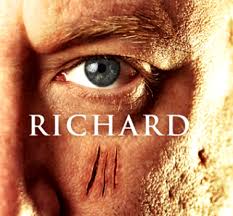 The production’s design evokes a dark sci-fi aesthetic, with reminiscences of such pop-culture hits as Twelve Monkeys, Mad Max, and Game of Thrones. Jorge Cousineau’s masterful set creates a disturbing picture of urban blight, in a bleak and dingy environment of concrete, metal, and detritus, windows covered in grime and graffiti, and live-feed video ‘selfies’ of the egomaniacal Richard and dream images of his vengeful victims. Maria Shaplin’s dramatic lighting in the smoke-filled darkness, Cousineau’s soundscape of industrial noise and executioners’ swords, and Rosemarie McKelvey’s mostly black and dusty costumes, which synthesize the historic with the futuristic, all contribute to the post-apocalyptic vision of “death, desolation, ruin, and decay” (as does the show’s promotional image, designed by Tori Harvey, with a triad of open vertical gashes in Richard’s face to signify III, and to convey the bloody brutality of his reign and his persona). Every element of this provocative work by People’s Light is visually striking and filled with past and current import, as productions of Shakespeare always should be.