So sings Uncle Jimmy to the show’s titular character. These are also the last lines, sung by the ensemble, of No, No, Nanette, a 1925 musical comedy (with lyrics by Irving Caesar and Otto Harbach, music by Vincent Youmans, and a book by Otto Harbach and Frank Mandel, based on Mandel’s 1919 Broadway play My Lady Friends), which opened last night at American University’s Harold and Sylvia Greenberg Theatre. And I’m certainly “happy” to say that the show is an utter delight. 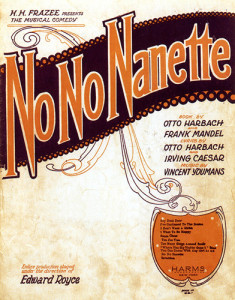 No, No, Nanette, is a musical that opened in 1925, became a huge success, and ran for over 600 performances (that would be like Lion King numbers back in those days). The musical was rewritten and revived on Broadway in the early ‘70s where it also achieved great success, and ran for over 860 performances, with a new book by Burt Shevelove, and this is the version that was performed last night at American University  by the talented cast. When the lights went down, and the orchestra started playing the overture, the I and the audience was transported back to the 1920s and the fun began.

The story is pretty much what you’d expect from a ‘20’s musical: you have your plot of boy meets girl, boy loses girl, boy gets girl back, mixed with some comedy of errors, jazz lingo, flappers, and obligatory dance numbers. But, oh, what fun it all is!

Tom (Joel Iscaro) wants to marry Nanette (Christine Miyashiro), but Nanette has a repressed wild side to her. Tired of constantly being told what she can and can’t do, she escapes with her maid and chaperone Pauline (Mallorie Stern) to Atlantic City to join in on some fun. Meanwhile, Nanette’s uncle Jimmy Smith (Sam Baum) has found himself a bit of trouble; his generous nature and disposable income has inadvertently made him the benefactor to three beautiful young women (what scandal!). He enlists the help of his lawyer Billy Early (Seth Andrew Watring) to cover up his indiscretion, much to the suspicion of their wives Sue Smith (Kat O’Connor) and Lucille Early (Julia Messer).

One of the standouts of the cast was the title character played by the small and utterly charming Christine Miyashiro. Miss Miyashiro was utterly adorable as the lusty Nanette. One of my favorite moments in the show was a 7-minute tap solo performed by Miyashiro that had the audience cheering in the end. Other standouts were Mallorie Stern as Nanette’s disgruntled maid and chaperone Pauline,; Sam Baum as Nanette’s generous and happy (for all the good it does him) Uncle Jimmy; Seth Andrew Watring proved to be quite charming (and light on the feet, too!) as the smooth talking Billy Early; and Joel Iscaro as the simple and lovesick leading man Tom Trainor had the right “swoon”-ability that you’d expect for a leading man in a ‘20’s musical.

This was also one of the best sounding and looking ensembles I had heard in quite a while as well. The voices blended together perfectly and I could understand everything everyone was saying and singing. The credit goes to the show’s Music Director Brandon Adams who, along with one other piano, also made up the show’s orchestra pit. At times this was effective, as it contributed to the ‘20’s aesthetic. Still, there were moments when I had wished there might have been some percussion. But this is just a minor quibble as the numbers were still very much high-energy.

Jason Arnold’s Lighting, Samina Veith’s set, and Barbara Tucker Parker’s costumes all fit together perfectly and were able to transfer the audience back to the feel of the 1920s.

According to Greg Anderson, Facilities and Production Manager: “The central portion of Samina Veith’s set is a turntable. Acts One and Three are the interior side, with changes to props, lighting sconces in Act Three, and fixed walls on either side of the turntable with panels that swap to different designs and colors. The main coloring of the interior is grayish, bluish, greenish–fairly period to the time. Hopefully Erin’s photos will include these colors as I don’t have the vocabulary.

Act Two, the other side of the turntable, is a yellow “clapboard” exterior with shutters and posts in the purple family (too dark to be mauve). The house color is pale enough for Jason Arnold’s excellent lighting to change to other colors, such as the signature yellow, green, and ruby tangerine of each of the three women Jimmy has assisted. The side panels swap to a purplish lattice.”

One of my favorite costumes was from one of the ensemble girls who was all decked out in flapper attire with a feather headband, pearls, and a nice sparkly dress.

Karl Kippola was the production’s Director and Choreographer. In reading his director’s notes, it was quite clear that this was a musical that held a certain fondness for him. It showed. The production was simple and fun, with high energy dance numbers that showed an admiration for the fun of the piece. He was able to capture some really nice scenes between the characters, and don’t even get me started on the dancing. During the tap numbers, all the dancers showed great unity. Mr. Kippola’s choreography was as smooth as a brand new record playing on the Victrola.

My favorite number in the show was, arguably, the show’s most famous song “Tea for Two.” The song is almost ingrained into American culture that I was actually quite shocked to find that it came from this show. The two leads (Miyashiro and Iscaro) sing this song that details their perfect future together. With the two sultry sounding pianos, Arnold’s blue mood lighting, and elegant choreography from Mr. Kippola, the number really brought out the song’s romantic nature and was quite beautiful.

American University’s toe-tapping No, No, Nanette is fun escapism, and it does its job effectively. The cast was right to sing those final lines, because I and the audience did enjoy ourselves. This show did leave me quite happy indeed. Thanks, Uncle Jimmy!

LINKS:
Review #1: ‘No, No, Nanette’ at American University by Patrick (PJ) McMahon.

Review #2: ‘No, No, Nanette’ at American University by Ravel Brickman.