Great plays ask great questions. Sometimes, if we are lucky enough, a production finds the inherent questions in a play and interrogates them in ways only theatre can. The Wilma Theater’s production of An Octoroon is one of those occasions. Under the direction of Joanna Settle, the company takes on Branden Jacobs-Jenkins’ adaptation of Dion Boucicault’s 1859 antebellum melodrama. The play, however, is not only an adaptation. As BJJ—a characterization of the playwright—explains how he came about adapting the original work. The play exists on two levels: the story about the story as well as the original plot. Boucicault’s original play—which focuses both on a plantation owner’s love with Zoe, the titular octoroon and the friendship between a slave and Native American which results in a murder and a framing—caused quite a stir when it premiered in 1859. No one expected the play to be received smoothly, evidenced by the police presence at the original opening. That production garnered extreme reactions, so much so that Boucicault’s wife, who played Zoe, quit the production after one week. The play is no less provocative today. Only now, as BJJ’s intertwining narratives reveal, we are left to negotiate a 19th century view of justice with our 21st century value systems.

The result is a searing self-awareness and inquisitiveness about theatre’s duty to make the audience feel. This sense of self awareness is present from the onset. BJJ enters and speaks the first lines of the play directly to the audience, “Hi everyone. I’m a black playwright.” The sense of openness, courage and humor that comes with such a convention is handled masterfully by James Ijames, a playwright himself, well known to Philadelphia audiences. With seeming simplicity and ease, Ijames weaves back and forth between directly addressing the audience as the playwright and taking part in the melodrama unfolding before us. From his first moments on stage, it is clear Ijames is the heart and soul of the production.

However, this sense of self awareness does not end with the performers. The audience is part of the show as well. Every aspect of the production works to constantly remind the audience that they are as much a scene partner as any character. The first scene exemplifies this. Just as BJJ brings his own status as black playwright to the forefront, so too does he draw the audience into the spotlight, citing how he is constantly “surrounded by white people.” This type of meta-theatricality is excellently crafted by Settle, at once humorous and unsettling.

BJJ, however, is not the lone storyteller. He is soon joined by a character representing Boucicault, played by Ed Swidey. Swidey also does triple duty, playing the Native American Wahnotee and LaFouche. Add to that Justin Jain, who plays the production’s assistant, and both slaves Pete and Paul, and you have the triad which stand as the production’s driving force. These three tell the story not only by jumping between narratives, but by donning face paint to represent different races—a practice thriving in Boucicault’s day, but a contentious topic and jarring sight today.

While it is clear, Ijames, Swidey and Jain together are a powerhouse, the rest of the cast, who make up the characters of the original plot, are not only up to the task, but thrive in the uber-theatrical conventions of melodrama. Yet, to the actors’ credit, scenes never lose a grounded sense of truth and urgency. Campbell O’Hare particularly excels here as Zoe. There is an inherent charm and endearing quality to O’Hare, even in the most outlandish moments.

Balancing out the melodrama, over-the-top by any contemporary standards, is Taysha Canales, Jaylene Clark Owens, and Alina John as Dido, Minnie, and Grace, respectfully. Through them we get image of the daily plantation life of slaves, filtered through a 21st century lens. This juxtaposition provides a disarming humor. Canales, Owens, and John craft some of the play’s funniest moments. However, like virtually every part of this play, they resonate on multiple levels. They speak not only to the representation of black people onstage in the 19th century, but also give rise to questions of how we view blackness on stage in contemporary America—a question Jacobs-Jenkins explicitly says he has no answer for.

The set, lighting, and sound design cannot be ignored. They work together to create a complete experience. Matt Saunders’ set speaks as loudly as any character and plays an equally vital role in defining the world of the play. The scene looks like the innards of the theatre have been spread across the stage. Platforms, crates, a hole in the floor and wooden flats  ensure that no matter how invested we become in the plot, we are never unaware of the theatre we are in.

Thom Weaver’s lighting design and Zachary Beattie-Brown’s sound design come into play too. Simultaneously the lights emphasize the world of the play—creating grotesque shadows in moments of ugliness, and keep us grounded in the world of the theatre—continually rising on the audience, allowing us to take ourselves in along with the onstage action.

Finally, the Philadelphia native band, Ill Doots, who created the show’s original live music, were a constant presence, reacting to, emphasizing and interacting with the action on stage. Their music, wholly contemporary, provides a thematic subconscious for the play’s characters. Nowhere is this more potent than in the final moments the play. After the characters have taken us through a full range of emotion and thought, all the players join the band in their final number chanting—“I didn’t ask for this. So what? It’s all we get.” It is a sobering moment, at once harrowing and somehow containing a glimmer of hope. One thing is for sure—comfort does not live here. Nor should it.

James Baldwin once said “The purpose of art is to lay bare the questions that have been hidden by the answers.” The play does not answer many questions. To presume to do so would be foolish. Rather, what the Wilma’s production does so well is open up space. It creates openings for the horror, joy, devastation, laughter, and, yes, the distinctly contemporary discomfort which modern sensitivities and political correctness so often tightly syphoned off. Perhaps this is how our questions may best be asked—with slight discomfort, unsure of where we stand in relation to the action on stage. The uncertainty is unavoidable, and the answers may not be apparent anytime soon. But one thing An Octoroon proves is that the truth lies more in the searching than in the easy answers. 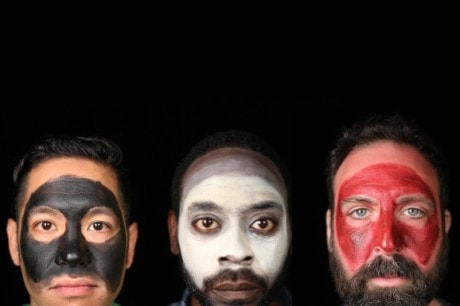