When the Philadelphia Artists’ Collective (PAC) decided to schedule He Who Gets Slapped for its mainstage production of spring 2016, the all-classics company recognized the opportunity it offered to forge an exciting partnership for the show with the Philadelphia School of Circus Arts. Russian playwright Leonid Andreyev’s little-known and rarely produced dark comedy, now celebrating the 100th anniversary of its 1916 Moscow premiere, tells the story of a sad clown with a secret past, set in the backstage of a Big Top at an early 20th-century French circus. 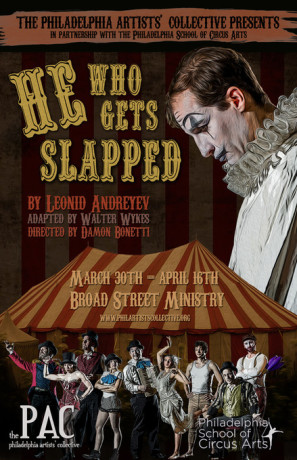 Though the script, adapted by Walter Wykes in 2007, focuses on the behind-the-scenes relationships, Director Damon Bonetti wanted to contextualize the story and to give further definition and development to its characters by interspersing the four-act play with interludes of circus routines by members of the troupe. So during his audition process, Bonetti required that each of the actors he saw not only “perform a scene or two from the play, but also do something physical, or play a clown.” Once he cast the multi-talented ten-person ensemble (which also provides live mood-setting music throughout the show, under the music direction of actor/musician Josh Totora), the unique collaboration began, with the PAC’s actors starting training sessions last fall at the Germantown studios of the PSCA.

Founded by Executive Director Shana Kennedy in 2008, the circus arts facility has become a regional center for instruction in acrobatics, aerial skills, juggling, and balance, attracting participants of all ages, at all levels, and for all purposes–be it fun, fitness, professional development, or career aspirations. The classes have become so popular over the past few years that most are filled to capacity, the need for a larger space has become evident, and the search for a new headquarters is on. In the meantime, Kennedy has been happy to work with the PAC on their upcoming pairing of theater arts and circus arts.

Terry Brennan, an actor, trainer, and movement choreographer for the PAC production, and an instructor at PSCA for the past three years, did a preliminary physical evaluation of his cast mates “to determine what they could do” prior to beginning their sessions. Though some had more previous training in physical performance than others, Brennan found that the entire ensemble was “serious, dedicated, and fearless!” Of course safety was of paramount concern, and learning such demanding and sometimes dangerous new skills takes time. But because the actors’ schedules only permitted them to attend workshops for one or two days per week, rehearsals alternated between one day of staging and one day of physical movement, and the show’s opening was already set for April 1st, he was aware that “time was not on their side” and had to make some decisions about what could be accomplished and what should be included.

In addition, Brennan and Bonetti were aware that the ceiling of the Broad Street Ministry–the historic venue in which the PAC performs—might not securely anchor the riggings needed for such aerial stunts as trapeze and corde lisse, so it was decided that they should focus instead on other circus skills. The production will include a wide variety, ranging from partner acrobatics, climbing, tumbling, and slapstick comedy, to bullwhip, hat tricks, rolling globe, juggling, and rola-bola, as well as an original tango that incorporates some circus moves.

Bonetti is delighted to see his lead actors—Ross Beschler as He and Isabella Fehlandt as the love interest Consuelo—“doing things they’ve never done before in front of an audience.” And because the performance space at Broad Street Ministry is much more intimate than that of a full-scale three-ring circus, he expects that the experience for the audience will be “up-close and impactful.” So if you’ve ever dreamed of running away to join the circus, seeing He Who Gets Slapped is your perfect chance!

He Who Gets Slapped plays March 30-April 16, 2016 and is being performed by the Philadelphia Artists’ Collective at Broad Street Ministry – 315 South Broad Street, in Philadelphia, PA. For tickets, call the box office at (215) 551-1543, or purchase them online.