In his 70s, Art Garfunkel still has control of a gorgeous, light counter-tenor, and an ability to tell the story of a song while connecting with his audience. The Hylton Center for the Arts at George Mason University’s campus in Manassas has beautiful acoustics and the singer took full advantage of them. The moments when Garfunkel gently sang an a cappella piece that he had sung as a child in temple was gorgeous, reverberating around the beautifully tuned concert hall. 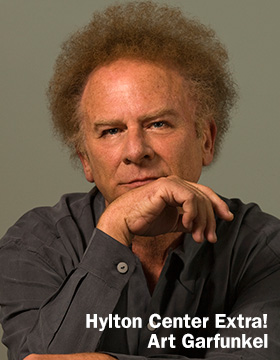 Backed up by a guitarist and a keyboardist, Garfunkel impressed as a solo performer who first came to critical attention in the 1960s with his then partner, Paul Simon. Among the most famous duets of American music history, Simon and Garfunkel, as a group, influenced Garfunkel’s future career, despite the two breaking up in the early 70s.

Art Garfunkel is a great showman, interspersing the well-known hit songs which he made famous with anecdotes and poems, and occasionally, offering songs less familiar to his audience. Included in the evening were hit songs from his solo career; “All I Know,” “The Perfect Moment,” and “Bright Eyes,” as well as those with Simon: “Homeward Bound,” “Scarborough Fair,” “The Sound of Silence,” and “Bridge over Troubled Water.” He also shared covers of songs from some of his favorite writers: Randy Newman, Jimmy Webb, and the Gershwins. His banter with the audience did not reflect the stage fright he claimed he still has more than 50 years into his performing career.

After most songs, he would share short poems or small stories he has written, which will appear in his autobiography, published next year by Knopf. The stories’ themes ranged from explaining the background of songs to his long walks across America and Europe, and to lifelong friends made during his acting career, such as Mike Nichols and Jack Nicholson. Most members of the audience were fans from the beginning of his career, but the younger set also appreciated the talent we were fortunate enough to hear.

Running Time: One hour and 50 minutes, including a 20-minute intermission.

An Evening with Art Garfunkel, performed one night only on March 31, 2016 at The Hylton Performing Arts Center – 10900 University Boulevard, in Manassas, VA. For future events at the Hylton Center, call for tickets (888) 945-2468, or go online.