Wilmington’s City Theater Company once again affirms its status as the go-to regional venue for youth-driven musicals, with its one-week run of Hair: The American Tribal Love-Rock Musical. Set in New York in 1968 (the year it made its Broadway debut), the show, with book and lyrics by James Rado and Gerome Ragni and music by Galt MacDermot, examines the turbulent times of the American Sixties through the eyes of the coming-of-age counter-culture generation, in search of peace and love.

CTC’s ever-impressive young cast, live band, and production team deliver the message loud and clear, capturing the socio-political climate of the era, the excesses of youth, and the life-and-death struggles young people confronted while the Vietnam War raged and the Selective Service System was still in place. The excellent Brendan Sheehan leads a high-spirited (and I do mean ‘high’!) tribe of thirteen as Claude, a long-haired Anglophile from Flushing (affecting a British accent and singing his paean to “Manchester, England”) faces conscription and must decide if he should join his hedonistic friends in burning their draft cards or report for duty, as expected by his conservative parents and government.

Directed by Michael Gray, the show honors the no-holds-barred freedom of expression of the original, filled with colorful expletives, an irreverent attitude towards religion and the flag, a sybaritic approach to sex and drugs, and the then-controversial nude scene at the end of Act I (here the majority of the cast just strips down to their undies, with only two of the guys going for ‘the full monty’). CTC’s production also adds some clever updates—including cell phones, a reference to Beyoncé, and a protest sign that reads “Black Lives Matter”—to appeal to a new audience and to impart current relevance to the nearly 50-year-old show.

The engaging characters defy racism, sexism, and the values of the older generation, as their story is told through 33 familiar songs, many of which became independent chart-topping hits and anthems of the contemporary youth culture. Among the highlights are the powerhouse opening number “Aquarius” (delivered with strength and conviction by Kyleen Shaw); a heartfelt version of “Easy To Be Hard” by Grace Tarves; a beautiful duet of the Hamlet soliloquy “What a Piece of Work Is Man” (a segment of The Trip) sung in perfect harmony by Dylan Geringer and Will Brock; and rousing renditions of the title song “Hair” and the uplifting finale of “Let the Sunshine In” (from “The Flesh Failures”), delivered with idealistic passion by the full ensemble and accompanied by a live six-piece band (Dave Marion, Kevin Niemi, Robert Baronio, Steve Smith, Jon Luther, and Joe Trainor, who also serves as music director).

Rounding out the terrific “tribe” are Jeff Hunsicker, Dominic Santos, Adam Montgomery, Liat Kovnator, Frank Schierloh, Pam Atk, George Murphy, and Ben Deane, who makes a hilarious drag appearance as anthropologist Margaret Mead, attempting to explain the sociological phenomenon of hippies. The immersive production is performed in intimate proximity to the viewers, with segments of audience interaction, in a mostly bare black-box space with two moving scaffolds (scenic design by Vicki Neal and Richard A. Kendrick) and brightly-hued spray-painted graffiti murals by Terrance Vann on two back walls.

Youthful choreography by Dawn Morningstar and Tommy Fisher-Klein captures the moods of the characters and their songs; period costumes by Lauren Peters and Kerry Kristine McElrone include bell-bottom hip-hugger jeans, a Che Guevara tee-shirt, bandana headbands, crocheted and fringed tops, a tie-dye dress, and denim jackets; and lighting by Neal and Kendrick evoke the hallucinatory experiences of the acid-dropping group with strobe effects and neon colors.

It’s been said (in a quote attributed to both Grace Slick and Paul Kantner of the Jefferson Airplane), “If you remember the Sixties, you weren’t there.” But you can revisit the period of hippies and yippies, free love and psychedelic drugs, be-ins, and anti-war protests through CTC’s mind-blowing production of Hair! 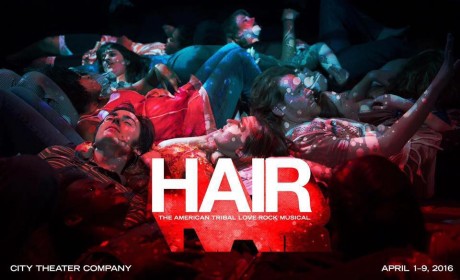 Hair: The American Tribal Love-Rock Musical plays through Saturday, April 9, 2016, at City Theater Company, performing in The Black Box at Opera Delaware Studios – 4 South Poplar Street, in Wilmington, DE. For tickets, call the box office at (302) 220-8285, or purchase them online.