Sometimes I hear a concept and I find it hard to envision – Shakespeare with no words for example. Having seen it, I’m now a huge fan and never miss a show.  On the other hand, buff Australian dudes performing magic naked was very easy for me to grasp. I recently got a chance to chat with Christopher Wayne and Mike Tyler, the creators and stars of The Naked Magic Show, about their first American Tour, coming later this month to Baltimore and DC. 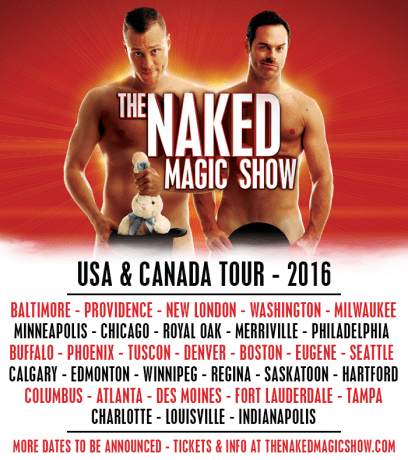 Lucrezia: Any culture shock so far?

Christopher: Well thankfully America is my favourite country to visit, and we did a few tryout shows here last year, so I am very familiar with the people and the places. I have noticed there are some interesting language differences, for example, you guys have “Root Beer,” but in Australia, “root” means sex – eg; “I think he rooted his ex last night.”

Mike: We had a brief 3-week visit to America last year as a warm-up… vital for a naked magic show where we reveal all! ;-) This gave us a taste of what to expect and we both absolutely love the USA. The surfboards and jars of Vegemite stay at home on these trips, but we guarantee to bring our laid back attitude and Aussie accents.

How did the two of you meet?

Christopher: We actually met in our home city of Brisbane at an event, where I was a guest and Mike was the entertainment doing magic. He was honestly one of the best performers I had seen and I knew I had to become friends with him. We went on a “bro date” and have been great friends since. Now we get to travel the world together with our sleeves up and pants down, so who knew!

Mike: We actually met at one of my magic performances. Both of us were fully clothed and we connected through the common interest of magic. We have become closer and closer since then, to the point where we now feel 100% comfortable getting naked with one other. Still just friends though.

What was the conversation like that led to performing naked?

Christopher: Because Mike was named Mike and was a magician (cue “Magic Mike”), he kept getting women at shows making sexually suggestive magic jokes like “How big is your wand?”, “Can you make your clothes disappear?”.  We discussed it and realized that in the history of magic, nobody had ever made a naughty magic show that celebrated all of those cheeky things that everyone has inside of them. We started writing it, and now it’s one of the most popular magic/comedy shows on the planet!

What kind of magic can we expect at your show – sawing people in half? Making things disappear? Pulling rabbits out of … ?

Christopher: You know, a lot of people think that the “naked” part might just be a gimmick, but Mike and I are both long time magicians, so when you come to our show, expect to see some amazing and hilarious magic, but done in the cheekiest way possible. Also, expect to be a part of the show (but not naked). In The Naked Magic Show, there is a LOT of audience participation, and it makes for the most amazing moments ever.

Mike: Rather than a show of classic grand illusions or cheesy magic, The Naked Magic Show a high-energy party atmosphere where two buff Aussie men get naked while performing incredible trickery and non-stop laughs that’ll leave the audience with a sore jaw… from laughing! As we were both magicians before ever deciding to get naked on stage, the actual magic in the show is top-notch. It’s all themed around those naughty topics that we normally only discuss with close friends behind closed doors after a few wines. It’s the perfect girls’ night out.

Who are your magic heroes? Naked heroes?

Christopher: My magic hero is David Copperfield, I have loved his stuff since I was a kid. I met him last year and when he walked in he knew my name, and he knew the name of our show, I almost threw up. As far as naked heroes, I’m going to give a weird answer and say that Mike and myself are my naked heroes, because we have a show that is unlike anything else on the planet, and we do it without our pants.

Mike: While I respect and admire a small handful of magicians, it was fictional heroes like Superman and the Ninja Turtles who initially helped spark my interest in magic. Magic is the closest thing to having superhero powers as it enables us to be able to do things that defy belief. As for naked heroes, Channing Tatum as Magic Mike has led to people making comparisons and assumptions about the naked magician called Mike. I have him to thank for setting the bar so high.

Did you discover any unforeseen hazards to performing naked?

Christopher: Our biggest hazard came during a photo shoot where we were naked and playing with open flames. A piece of flash paper was thrown in the air and landed on the end of my penis. I almost lost my job and my hobby in a heartbeat.

Do you think the variety arts, you know like magic and stripping, are making a comeback?

Christopher: I actually feel that there is an over-saturarion of variety shows. Producers often seem to think if you get a little bit of sex appeal and mix it with circus or a variety act that its enough for a show. In 2016, between our smart phones and the internet and Netflix and everything else, I think you need a pretty good reason to leave your house, and part with your time and money in the name of entertainment – so if you are going to see a show, I think the standard should be amazing.

Mike: Not all comebacks are a good thing. Take Justin Bieber for example. Seriously though, TV talent shows and the internet have given people access to entertainment like never before. The live entertainment business has become like the Hunger Games… and we have the best weapons of magic, comedy, and nudity! The Australian thing helps too ;-)

How do you handle groupies?

Mike: If I had a dollar for every time I got asked about groupies! Nothing in our lives is more important than putting on the best possible performance (on stage!!) every night. Sometimes we hear from happy husbands who thank us for the “foreplay” that the magic and the nudity provides to their wives who return home rather excited ;-)  We’re both hot-blooded single males who love getting naked on stage… but we’re also first and foremost professionals.

Can you make Donald Trump disappear?

Christopher: I’m scared to make a joke about this just in case he wins. If he does win, I’m more than happy to adopt any Americans that would like to move to Australia with me?

Mike: My strengths are delivering amazing magic, looking good naked, and making people laugh. I’d never be allowed into your country if I was good at making politicians disappear.