Bravo to the Stagecrafters of Chestnut Hill. Their production of Clifford Odets’ The Country Girl captures all the hidden complexity of this powerful and difficult to achieve drama.

Odets tells the story of the creation of a Broadway play. The star has unexpectedly departed to Hollywood and the young director, Bernie, insists on taking a chance on a formerly great artist who is now “all washed up.” That actor, Frank, has a drinking problem, and age has made remembering lines difficult. His wife, Georgie, seems helpful but a little too intrusive. At first, one assumes this will be a typical backstage drama, but hold on. The author starts piling on questions and contradictions that elevate this to an epic human struggle. Is the actor’s wife really out to help him? Has marriage to an alcoholic destroyed all happiness in her life? And the young director? Does he really care about Frank’s artistic development and rehabilitation, or is he using him for his own success? And the actor himself? Does he really want success or is he too dissipated to accept help from anyone? It soon becomes clear that Odets’ has mired his characters in profuse mutual codependency struggles: alcoholic, artistic and sexual.

Patrick Cathcart plays the young director as deeply committed to the play and Frank’s success. It is performance of great energy, which allows the other performers to successfully underplay. At first Bernie hates Georgie, because he believes she wants to secretly undermine Frank’s success and keep him dependent on her. Later, he finds himself attracted to her. Cathcart is persuasive in all aspects.

Mort Paterson is absolutely convincing in all facets of Frank’s character.  Striking of stature and possessing a powerful Shakespearean voice, Paterson projects the personality and charisma needed for stardom. But, in his first entrance to audition for the leading role, he reeks “loser,” someone who has been confined to lonely hotel rooms and chronic unemployment. As the performance develops, Frank gains in stature and is moving in his continued attempts to recall his lines and regain the spontaneity that made him famous. This portrait of an alcoholic, who believes that he cannot succeed without the support of a drink, is riveting. Mort Paterson is a known local actor, well remembered for his King Lear, but this is finest, most detailed performance yet.

The title role binds the play together, and it is to the credit of Pierlisa Chiodo Steo that she keeps Georgie a little mysterious. At times, she seems too controlling and at other times, she is the angel who can actually manage a marriage to a defeated drunkard. Steo‘s performance is subtle and emotionally rich, as might be expected of a performer who has played Regina in The Little Foxes and Ranyevskaya in The Cherry Orchard in this theater. 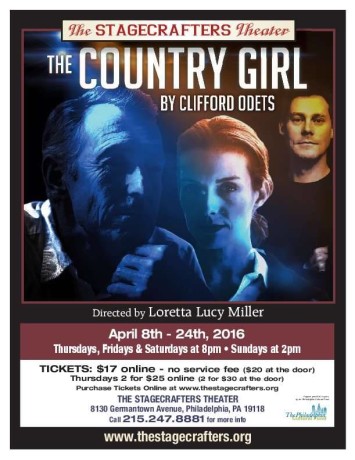 The supporting cast enhances the three lead performances. Rich Geller is relaxed and comforting as the caring stage manager. Lawrence H. Geller really gets the conflict off to a strong start as the cynical, wallet-tight producer of the first scene.

The direction of Loretta Lucy Miller somehow manages to keep all of these balls in the air while carefully and subtly revealing the characters’ true motives. This is quite a feat, and the fast paced performance mines the script for the tiniest of subtleties. There is a scene in the play where Bernie and Frank rehearse late into the night discovering the hidden treasures of their characters. No doubt the same thing occurred in Miller’s rehearsal process.

The physical production is extremely simple. Joan Blake‘s costumes capture the late 1940s right down to the saddle shoes, thick woolen skirts, and heavy overcoats. Gilbert Todd’s lighting is direct and to the point. There is no set. Designer Yaga Brady supplies generic furniture in front of black flats and curtains. Since most of the play is set backstage in a theater, this works just fine.

The theater building itself is a charming Tudor house in a wonderfully picturesque neighborhood. Congratulations to all. This is the third time Stagecrafters has produced The Country Girl in its 87 seasons of production.  Don’t miss it.