Murder at the Mansion Dessert Theater’s A Wedding to Die For featuring the talents of A Taste For Murder Productions was an entertaining and intimate production about a wedding gone terribly wrong. It had each audience member thoroughly invested in the performance.

Thanks to playwright Dean Fiala, A Wedding To Die For is not your typical wedding-gone-bad show. A creative and effective job was done with the simple singular set consisting of a reception table, four chairs, and silverware, by turning the set into numerous scenes – beginning with the entrance of the excited bride and giddy groom, and ending with…. I am not going to give the ending away!

The staging by Director Laura W. Andruski was clever. Although the performance area was small, she created space in the doorways as well as on either side of the table. This also brought the action closer to the audience, helping the characters give the delivery of their lines more impact, and it made each scene more exciting.

Before the play began, Andruski informed the audience that a character would die, and from the first few minutes of the play it was made perfectly clear who that person would be, but through creative staging, clever writing and brilliant acting, the identity of the murderer was unidentified until it was revealed.

The cast was terrific! Each character had his-or her-own distinct personality, and their own way of being hilarious.

The high-strung bride was played with gusto by Sarah Randles, who was set on having the perfect wedding but was obviously disappointed when she realized that the wrong champagne was being served. Her airhead husband, played impeccably by Noah Steurer, was set on getting through the reception so he could finally have his way with the bride.

Usually a wedding is a happy occasion but in this instance, the “help” provided by the bride’s friends, family and wait staff was miserable. The waitress, played wonderfully by actress Jackie Sweeny, never spoke a word, but through her gestures, eye rolls, and  body language, she convincingly showed that she did not want to be there and that she had no patience for the annoying bride.

We all know how important the ‘toast’ is and here the laughs continued to build as the disgruntled characters let out their true feelings during their not-so- heartfelt toasts. There was the sister who did not want to be the Maid of Honor because she was angry that the bride (her sister) was marrying her ex-boyfriend. Elizabeth Weiss was a hoot as the pissed-off sibling offering her toast to the ‘Happy Couple.’

The best man, played hilariously by Chris Penick, also raised his glass with a very unwelcoming toast, and then reflected on how horrible his life was, and then declared that he is “so happy!”

Jennifer Georgia is terrific as the Bride’s frustrated mother who is now paying for a second wedding for her brat. Her best friend Madeline is played wonderfully by Jill Goodrich, who is there to support the hysterical Mother of the Bride.

And if you can believe it, the nympho bride had a wandering eye which leads to her demise. At this point in the evening’s entertainment, a 20-minute intermission allows you to enjoy a buffet of tasty treats and take advantage of the cash bar. 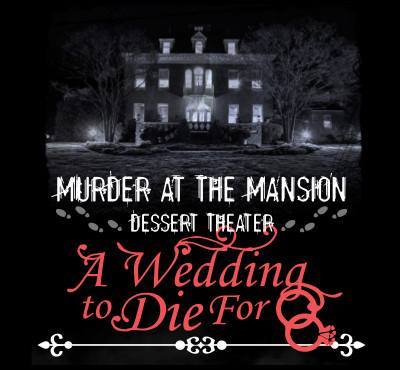 Once the audience has returned from intermission, the bride’s murderer is quickly revealed, which surprised me because usually the murderer is unveiled at the end of a Murder Mystery, but here it may sense. But I am old-fashioned and I would have liked some more conflict before the murderer was announced.

There may have been some minor plot-holes, but A Wedding To Die For was a highly enjoyable production. The atmosphere was welcoming, everyone working was kind, the actors stayed in character in a way that interested and intrigued me (as well as having audience participation), and the deserts they put out for the guests was rather delightful.

Everyone worked hard from the cast to the techies, and the friendly staff, and they turned a frightening (but well-deserved) murder into an engaging and humorous performance.

A Wedding To Die For played from April 8-10, 2016 at The Kentlands Mansion – 320 Kent Square Road, in Gaithersburg, MD. Visit www.atastefurmurder to learn where A Wedding to Die For will next be performed.