In his time, Macbeth was a successful, lauded warrior. He owned a castle and had an attractive wife whose ravenous ambitions, drive and ego matched his own. Neither was afraid to get their hands dirty to accomplish their goals.

Today, Macbeth might have succeeded as a new tech lord, a bitcoin banker, a Wall Street Baron or, even, a presidential candidate – like the one recently endorsed by the New York Post.

As twilight descended, a solitary bagpiper garbed in a clan tartan kilt was performing on Calvert Street outside the historic old bank building that houses the Chesapeake Shakespeare Company, setting the mood for what was to come.

It was almost broken by a passerby taking a selfie with the piper!

Inside, a mist hung over the three-sided thrust stage.

Designed by the multi-talented Daniel O’Brien (who also designed the lighting and is the show’s technical director), at the rear of the simple stage a double, rough-hewn wooden staircase rose to the second level of the theater. Weathered barn wood planks, most with ominously sharp, angled ends were attached to the stairs, suggesting, alternatively a castle’s walls, a witch’s lair, a banquet hall, a forest.

Sound Designer Neil McFadden’s spooky sounds began to intertwine with the smoky mist, playing on the strings of the audiences nerves. Making the entire production just about perfect were the costumes designed by Kristina Lambdin. They evoked the Middle Ages period of the script and were loaded with subtle details and exquisite craftsmanship. Characters wore understated, razor-cut wool plaids draped with sumptuous furs, or chain mail head coverings that pulled down into sparkling collars. The well-crafted costumes were complemented by the wigs, hair and makeup of the characters – real life makeup instead of high drama makeup.

Directed by Paul Mason Barnes, a resident of Ashland, Oregon, and resident director of the Great River Shakespeare Festival in Winona, Minnesota, this production is a haunting tribute to Shakespeare. It is a show that should be sold out for every performance.

The show is designed so the performers’ entrances and egresses are interwoven with the audience. They appear and disappear through third floor stairwells, from behind a row of second story seats, or brush past the audience on the main floor. The audience becomes part of the performance physically and emotionally.

The cast is stellar. Not a false note. Even the 5th and 7th grade students (Drew Sharpe and Mia Boydston) portraying Macduff’s children do so convincingly, proving sibling brattiness is universal, not a 21st century quirk.

Macbeth, as portrayed thoughtfully and emotionally by Jeff Keogh could have, in another era, been Gen. George Patton – or Hermann Goring. He’s got it all, a major victory in a decisive battle, and the admiration of Duncan, king of Scotland (Scott Alan Small). Yet returning home, he encountered the three witches or Weird Sisters (Kathryn Elizabeth Kelly, Tamieka Chavis, and Greta Boeringer) and falls hard for their tempting prediction. His noble intentions curdle into treachery and turn murderous.

The plot is a classic one, so there is no need to repeat it here. Yet, it is new all over again in this production.

In addition to those mentioned above, kudos to the performances of everyone in this cast, which is beautifully diverse – a blend of ages, races and silhouettes. Lesley Malin as the troubled and haunted Lady Macbeth is outstanding (So, too, are her successes as managing director of the company.).

So, too, are Small as Duncan, Gerrad Alex Taylor (doing double duty as the fight captain) as Malcolm, Vince Eisenson as Macduff, Jose Guzman as the spectral Banquo, Molly Moores as Lady Macduff, and Imani Turner as Donalbain.

Chesapeake Shakespeare Company’s Macbeth is one for the ages. Don’t miss it! 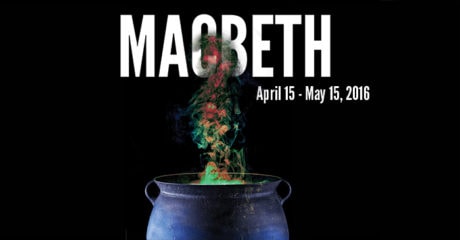 Macbeth plays now through May 15, 2016 at Chesapeake Shakespeare Company – 7 South Calvert Street, in Baltimore, MD. For tickets, call the box office at (410) 244-8570, or purchase them online.
__
Parking at a covered garage less than two blocks away, with a special voucher obtained at the theater during the show, is only $5.00.