The night’s program started with a performance by Las Cafeteras.  If you have never seen or heard this band, it is a must. Their music and presentation was very different than what we think of as Latino music. It was not just a band, or just singing, there was dancing and social protests mixed into a wonderful bag of sounds that was not just influenced by Mexico and Central America but had some roots here in the USA. 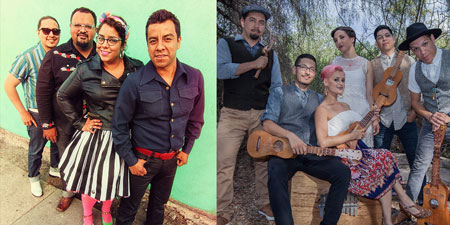 Denise Carlos and Leah Gallegos were the primary vocalists, but they were not just that. They also showed us a wonderful dance, The Zapateado, which incorporated elements of tap and flamenco. The small wooden platforms, called tarimas, on which they performed the dance became part of the percussion section. Joining the two ladies was Hector Flores who also sang, played and danced as spectacularly as the women.

The group also used some very interesting instruments from glockenspiels, jaranas (ukulele like Spanish instruments), requintos, marimobols, cajóns, and even a donkey jawbone.  From the moment the music began the audience was up dancing and swaying to the beats.

For me the highlights of the night were a wonderfully Latin rendition of “This Land is Your Land” by Woody Guthrie, and a TexMex version of Johnny and June Carter Cash’s “Ring of Fire.”

Other numbers varied from Latin rap or hip hop featuring Daniel French, to the protest song, “Señor Presidente,” which preached harmony and tolerance.  Sometimes, the music started in one genre and ended in another. Several required audience participation.  It was wonderfully unpredictable.

The finale, a very different version of “La Bamba,” a Latino folk song made famous by Richie Valens, featured the extraordinary zapateado dancing.

Playing the wonderful music behind the singers, and doing some back up singing of their own,  were percussionist Jose Cano and for this performance, Gloria Estrada on the uke bass and Jorge Mijangos a master of the jarana (He also builds them). All three did their own solos and showed their mastery of their instruments.

After ending on this high note, during intermission, we were treated to a taste of Latin American cuisine through the cooperation of Whole Foods in Columbia.

Then, we were ready for the third course of the evening, the Grammy Award-winning band, La Santa Cecilia. This band was quite different than Las Cafeteras.  They were more like a traditional rock band with a very strong lead singer backed by excellent musicians.  However, this was definitely Latino.  The beats were salsa-like, the lyrics were mostly in Spanish and what you might expect o hear in the American Southwest, Mexico, Central American or even the northern countries of South America.

The singer, Marisol “La Marisoul” Hernandez had a voice to rival any top American diva. Powerful, earthy, clear and full of feeling she rocked the theater until the end of the night.

She showed her diverse talents warbling a Latin version of the Beatles’ “Strawberry Fields” and crooning a couple of soulful ballads all in a dress that would have made Frida Kahlo jealous.  She was a force of nature.

Their unique sound is also due in part to their virtuoso musicians from Jose “Pepe” Carols on accordion and Spanish guitar, Miguel “Oso” Ramirez on percussion to Alex Bendana on bass. Joining them tonight was Marco Sandoval on guitar and Eric Kern on drums both marvelous additions to Saturday’s performance.

Just a small request on behalf of the non-Spanish speaking members of the audience: It would have been beneficial if the song titles were announced in Spanish and English. I might have purchased some CDS if I knew their names.

The end result was a feeling of more than getting two-for-one, but dozens of memorable moments for the price of one admission.

For Viva La Vida’s schedule and ticket information visit the festival’s website. For tickets call (410) 715-3044 or purchased them online.