A Touch of Star Quality at Spotlighters

Evita opened to a sold-out house on Friday night at Audrey Herman Spotlighters Theatre. Fans of the popular Tim Rice/Andrew Lloyd Webber collaboration can thank Director Fuzz Roark for bringing this seven-time Tony Award-winning musical to Baltimore for the first time in over a decade.

Evita chronicles the life of Argentine First Lady Eva Duarte Perón, affectionately known as Evita. As the illegitimate child of an absentee father, Eva and her mother and siblings were poverty-stricken and outcast by the middle and upper classes. Determined from a young age to improve her station, Eva made her way to­ Buenos Aires as a teenager. She’d became a successful radio personality and actor by her early twenties, when she caught the eye of powerful military officer, Juan Perón. With the help of Evita’s charisma, ambition, and popularity, Perón was elected President of Argentina. In her short life, Eva Perón captured the hearts of Argentina’s poor and working classes. Even now, she is an almost mythic character in Argentine culture.

A musical covering the whole of this legendary woman’s life requires multiple Evitas. Spotlighters’ production was graced by three talented actors in the title role. Lucia Kelemen played Young Eva with an impressive voice and an innocent charm. Teen Eva, nimbly performed by Clare Kneebone, was just the right combination of sassy and calculating to sing-and-dance Eva from her impoverished hometown to the promise and potential of Buenos Aires.

Becca Vourvoulas shines as adult Evita, portraying the divisive, “love her or hate her” Argentine with a realistic, honest approach. People are never just one thing and Vourvoulas deftly presents the often-conflicting sides of Evita. In some scenes, Eva is maligned as a society-climbing strumpet; in others, she is lauded a saintly savior, tending to her nation’s poor and bringing hope and comfort to the needy. From the revolving door of increasingly powerful men in the cleverly directed “Goodnight and Thank You” to the iconic balcony scene in “On the Balcony of the Casa Rosada (“Don’t Cry for Me Argentina”), Vourvoulas plays it from the heart, making Eva Perón a sympathetic character despite her flaws. Vourvoulas’ voice is strong and clear, even as Eva’s health deteriorates, rendering her fragile and frail.

Bart Debicki brings a stoic formality to the Argentine President that is, judging by footage of the real-life Juan Perón, historically spot-on. While Eva was energetic and full of populist passion, Juan, was more reserved and, well, Presidential. In private moments, though, Debicki shows how Perón’s demeanor changes when he’s with the captivating woman he loves. This softening of the edges is clear from the moment they meet – Debicki, cutting a handsome figure in his military regalia and Vourvoulas, stunning in her exquisite gown. They only have eyes for each other as they sing the sultry-yet-upbeat courtship duet, “I’d be Surprisingly Good for You.”

Returning to the stage after an 11-year break, Rob Wall is one-man Greek chorus as Che, the unofficial narrator of Evita. Wall is an ever-watchful eye on Eva as she transitions through the various stages of her life. His resonant voice speaks for the everyman, sometimes optimistic about Eva’s goals for her countrymen, and sometimes disappointed and critical of her material excesses.

Claire Iverson gave a memorable performance as Mistress. Having been abruptly replaced and sent packing by Eva, Juan Perón’s ex suddenly found herself on the street. In her plaintive song, “Another Suitcase in Another Hall,” Iverson showcased not only her lovely voice, but also her acting skills. With touching vulnerability, she made a character only seen briefly in the play really stand out. It’s exciting to see someone exhibit this much talent and aptitude at a young age (Iverson is a high school senior); I look forward to seeing what she brings to future roles.

Another standout performance was given by Michael Blum. A member of the ensemble, Blum played several roles in the production including one of the disapproving military establishment men and a member of the poor, working community whose lives were touched by Evita. Blum has great stage presence. A powerful singer with a rich, distinctive voice, his poise and confidence enhanced every scene he was in.

The ensemble as a whole was fantastic. Their voices blended together to create something so much bigger than the ten people involved. In “A New Argentina,” it felt like there were 50 people onstage. A rousing, hopeful anthem beautifully performed, it was an inspiring way to close the first act. When the lights went up for intermission, a man near me exclaimed in disbelief that an hour could not possibly have passed. He was so drawn into the performance, it felt like it went by in minutes. I could totally relate.

Musical Director Michael Tan’s contributions to Spotlighters shows are always valuable; there’s nothing like a live band with live theater. Playing for this production are Michael Tan on keyboards, William George on percussion, Christi MacDonald on guitar, and Greg Bell on bass. Evita is a “through-sung” show. There are almost no spoken lines; everything is expressed in song. The musicians are a critical part of being able to pull that off and, under Tan’s direction, they do so expertly.

The dappled sponge wall treatments and wooden shutters in Set Designer/Scenic Artist Alan Zemla’s design lent Spotlighters’ intimate space a distinctly South American feel. The real showpiece for this set, though, was Zemla’s rendition of the famous balcony at the Presidential Palace, Casa Rosada. When Vourvoulas sang “Don’t Cry for Me, Argentina” from the rose-colored balcony of the famous “Pink House,” that striking moment was exactly what you want it to be. The balcony was not only functional and pretty, though; it added much-needed performance space to a show that occasionally felt like it had a cast of thousands all in one spot.

This was the first show that Costume Designer/Wig Master Andrew Malone designed for Spotlighters. I hope it is not the last. These costumes are gorgeous. Malone and his team (Diana Haberstick and Darcy Elliot) capture the 1940s-1950s style with a huge variety of clothing. They helped make it feel like the production had numerous ensembles instead of one. The actors transformed from a group of poor workers to a gaggle of snooty aristocrats or Presidential Palace maids with lightning-quick changes.

From the peasant frocks in Eva’s hometown in “On This Night of a Thousand Stars” to the swishy dance hall dresses complete with playful petticoats in the terrific “Buenos Aires,” Malone nails it. His sartorial choices made each group distinct, and masked that the same few people were playing so many ensemble roles. And Eva’s clothes… from dazzling ball gowns to the more conservative tailored outfits from Eva’s beloved Christian Dior in “Rainbow High”… wow. Plus, that white balcony dress? I want to get married all over again just so I can wear that dress. 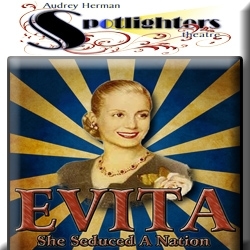 Spotlighters’ production of Evita hits all the right notes. It boasts a cleverly designed set, great singing, and terrific costumes. It includes standout performances by both named characters and members of the ensemble. And the music is truly beautiful. Local fans of this Webber/Rice epic have waited a very long time to see this musical back in Baltimore. Thanks to Fuzz Roark’s passion and the work of a talented cast and creative team, they will not be disappointed.

Evita plays through May 15, 2016 at Audrey Herman Spotlighters Theatre, 817 St. Paul Street in Baltimore, MD. Tickets may be purchased at the box office or online.