As the centerpiece of its 25th Anniversary Season, Baltimore’s Everyman Theatre has taken on the daunting task of mounting what are arguably the two greatest American plays ever written, Arthur Miller’s Death of a Salesman and Tennessee Williams’ A Streetcar Named Desire. What’s more, the plays are presented in rotating repertory, largely with the same actors, who often are performing one play at a matinee and another play in the evening, on a set that must transform from New York City to a steamy summer in New Orleans.

It’s a brilliant concept. Both plays premiered shortly after the end World War II, Streetcar in 1947 and Salesman in 1949, when, although we had overcome tyranny, the price we paid irreparably tainted our American innocence. The work of Carl Rogers, brought an awareness of mental illness to the fore and his client-centered approach to treatment was widely applied.  Perhaps most importantly, we began to see cracks in the notion of the American dream and in Willy Loman and Blanche DuBois, we see two individuals who have been left in its dust, like runners unable to make it to the finish.

There are many things to recommend about Derek Goldman’s production of Streetcar, not the least of which is that he and his cast have truly made this play feel like an ensemble piece. It would be very easy to turn all of the focus on Blanche (Beth Hylton), the damaged woman full of secrets whose extended visit to her sister Stella (Megan Anderson) and brother-in law Stanley’s (Danny Gavigan) shabby French Quarter apartment (the detailed two level set is by Daniel Ettinger) sets the sad events of the play in motion. Goldman doesn’t allow that to happen, reigning in his actors to keep the play as realistic as possible.

Streetcar is probably the most quoted of Williams’ plays. Who doesn’t hear the name Stella, without thinking of Brando?  And remember, “I have always depended on the kindness of strangers,” or, “We’ve had this date since the beginning”? My favorite, though, is Blanche’s line to Mitch (Chris Genebach), Stanley and Stella’s friend and the only man who has ever truly loved her, even though, unbeknownst to him, she has built their entire relationship on lies. She shouts to him, “I don’t want realism. I want magic!” It’s somewhat of a prescient line, because in grounding his production in reality, Goldman and his cast have created theatrical magic.

Beth Hylton tackles the iconic role of Blanche and finds, in her, a vulnerable, desperate woman with a shimmering exterior, who becomes more vulnerable and desperate as her past catches up with her, causing her entire world to unravel. It is a carefully layered and calibrated performance that Hylton builds to Blanche’s inevitable, destructive end. She is never better than when she is seducing a hesitant young teenage boy (Tavish Forsyth), who has come to collect money for the newspaper bill, and for the first time strips away her shiny veneer and allows us to see who Blanche really is. It is an intense, troubling scene and one of the highlights in a production teeming with them.

As Stella, Blanche’s sister, who gave up her family’s money and plantation, Belle Reve, for a common bad boy, Megan Anderson shows us an extremely dutiful sister and wife, acting more like a house maid than an equal. Despite the passage of time and the transition to adulthood, a part of Stella still looks up to her big sister, desperate for her approval, and refusing to accept the true Blanche, opting instead to see her as the Blanche she always wanted her to be.

And as Stanley, Danny Gavigan gets both the brutal violence and brutal passion of the character; Stanley is a man of extremes, who does nothing in moderation. When he drinks, he drinks until he’s drunk. When he plays poker, he plays until dawn. When he makes love, he is insatiable. But the performance is not a caricature. And when he runs out of the apartment and cries “Stella,” he makes that moment seem new and Stanley’s anguish as heartbreaking and urgent now as it must have been in 1947.

Goldman has added a few flourishes that are not in the script, but nevertheless enhance his production. A rich, honey-tongued vocalist named Kelli Blackwell strolls through the set in between scenes singing songs from the period which comment on and foreshadow the action.

It’s a clever way to mask some of the clunky scene changes and really takes us to New Orleans during a steamy summer so many years ago. He also uses an ensemble of actors, to play various bit roles and populate the playing area outside of the apartment. It does a lot to help set the mood, particularly at the beginning of the play, in terms of letting the audience know that this isn’t the nicest part of town.

Light illuminates the dark, shows us what we cannot see and there is much talk of it in Streetcar. The moody, ominous lighting is by Harold F. Burgess II. Blanche asks for the lights to be dimmed several times; she buys a paper Chinese lantern to hang over an exposed bulb, shielding its brightness. She prefers shadow, because in it, you can never truly see something for what it is. Towards the end of the play, Mitch remarks that he has never seen Blanche in the light, never really seen her. So he illuminates the room and exposes her in bright light, where she is no longer able to hide. It may be the first time brightness has crept in to the Kowalski home since Blanche’s arrival, but for the past two and a half hours a sustained brightness has hung over Everyman Theatre where this American classic has been polished to a high shine. 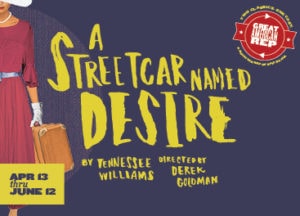 LINK:
Review: The Great American Rep: Death of a Salesman at Everyman Theatre by Patricia Mitchell on DCMetroTheaterArts.