Approximately once a month – twice, if they feel like it – a group of comedians gets together at the Platform Arts Center in Baltimore, and perform to a packed house for free. Let me repeat that – “for free.” 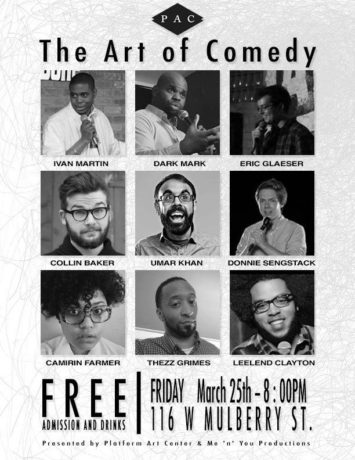 Hosted by comedian/actor/promoter Ivan Martin of Me-n-You Productions, the vibe is casual, yet elegant, with an open (if limited) bar, a talented DJ setting the mood (DJ Mark Legend), and an energetic, articulately profane MC in Mark “Dark Mark” Joyner. Martin, who did two tours of Iraq with the U.S. Navy before settling in Baltimore, has been hosting the comedy showcase since December 2014.

Platform Arts Center is an unusual place to hold a comedy showcase. A converted 1830’s rowhouse with studio spaces above a small storefront gallery, it does not immediately shout its utility as a performance space. Currently, there is an installation of child-like paintings and sculptures incorporating peanuts covering the walls and ceilings. However, Martin and company made the space their own with simple lights and decorations, bartenders at a draped table in the back, and DJ Mark tucked into an alcove near the stage.

The tone of the comedy night falls somewhere between an open mic and a house party full of some of your really funny friends. The performers clearly know and like one another, and cheer one another on between sets. The performances range from comedians just getting started, to more seasoned performers working on new material in a comfortable environment, to polished sets ready for the stage at more established comedy venues.

The night I attended, there were thirteen comedians on the bill, including Martin himself. Some, like self-described newbie Tim Tilghman, were tentative and only mildly risqué, while others, like the hilarious Ray Diva and Ronald James, were gloriously vulgar and politically incorrect. Nearly everyone on the bill had moments that had the room laughing out loud.
However, the true highlight of the night, was 21-year-old Donnie Sengstack.

Sengstack, who despite his age, has already won Magooby’s New Comedian of the Year for 2015, has a stutter: a quite noticeable stutter, which he openly incorporates into his act. His demeanor is laid back and cheerful, and unlike many of his fellow showcase performers, largely family-friendly. He alternated jokes about the sorts of things you would expect a 21-year-old to joke about – for example, how breakfast at Taco Bell reminds him of “the new Fallout Boy album. Nobody asked for it…and neither of them have been relevant since Chipotle showed up” – with commentary on the state of electoral politics in the US compared to the UK. It’s gentle and musing, and hysterically funny.

Next, Ivan Martin is taking the showcase on the road…well, up the street to the new Mount Vernon Marketplace (520 Park Avenue, Baltimore, MD 21201) on Friday, April 22, 2016, starting at 8:00 pm. Come early, eat at one of the tasty, trendy restaurants, and then settle in and prepare to laugh all night.

The Art of Comedy is held approximately twice a month at the Platform Arts Center – 116 W. Mulberry Street, in Baltimore, MD. Admission is free, and seating is first come, first served. Information and future dates can be found online here.