In 1895, modernist critics were unhappy with Oscar Wilde’s less-than politically-challenging plot from, The Importance of Being Earnest. Irish playwright, George Bernard Shaw wished to be “moved to laughter” rather than be presented with dialogue forcefully cueing an affirmative reaction. However, the dissociation and counterintuitive relations between stereotypical late-19th century aristocracy and the play’s succeeding character action is what has developed Earnest into a timeless classic. It is a hypocrisy of high-class intellect, wit and theatrically-gifted situational humor. Penn State Centre Stage presents Wilde’s often-produced farce – with a brisk running-time, just short of two hours – led by the directing talents of Richard Robichaux under the roof of Penn State’s most intimate performance space, The Pavilion Theatre.

Confidently, the versatility of this production’s individual acting components ride within the beautiful parallel lines of visual elements. Scenic Designer, Nichole D. Jara sets an immersive canvas of painted marble and white structural tiers, turning swiftly in association with the dramatic changes musically intertwined between the three-act piece. Comedic elements are present within an unsuspectingly goofy Miracle-Gro flower box – fashionably aiding  the foreshadowing character descriptions of the young, hopeless romantic personalities seen in Cecily Cardew (Jordan Cooper) and Gwendolen Fairfax (Anastasia Davidson). Cecily is as dependent on encrypting her life experiences within her personal diary, just as a 2016 teenybopper finds the need to live life through the recordings of a Snapchat video.

Miss Fairfax is first perceived as an independent flirt, one completely smitten with her beloved, Earnest (Gregory Bennett) and the preconceived notion that his name is of vital importance. However, by the double-life decisions of her fiance, Earnest influences his lover’s perceptions while he exists as himself in London and oppositely, “Uncle Jack”, a.k.a. John Worthing in the countryside – where heiress, Cecily resides under the care of Miss Prism (Megan Pickrell). The intellectual language protruding from every corner of Algernon Moncrieff’s (Cecil Blutcher) existence shadow the majority of the play’s one-liner relief system – a thematic concept hardly necessary thanks in-part to the ever-growing and recurring climactic tension.

Following the 1893 success of Lady Windermere’s Fan, Oscar Wilde reached the crest of his career with the opening of The Importance of Being Earnest, two years later – non coincidentally rising the curtain on Valentine’s Day at the St. James Theatre. Furthering in the life of this period-based, subject to scandal, Wilde introduced audiences with a characterized persona; a brash, cunning and an overly “conscious of chin height” matron named, Lady Bracknell (Jane Ridley). Dressed “above and beyond the nines”, Carly Reeder has stitched together a series of eloquent, costume ensembles worthy of unending praise – they are truly beautiful. The mother of Gwendolen, Lady Bracknell confronts her daughter’s proposer with a questionnaire session of proposal – a hilarious confrontation, Ridley’s divergence of emotion exposes the origins of our “hero. 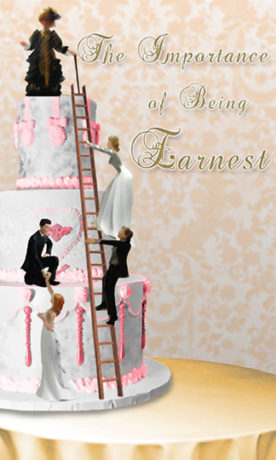 ”Who knew that a cigarette case, one well-kept leather bag and an army enlistment catalog could mold an assurance of self-identity? Glued together with a savvy bunch of seasoned actors, the sticky situations of interactive satire reveal the mirror-liked subjects of the play’s female and male counterparts. Cooper and Davidson personify the misconstrued friendships of recently-met feminine rivalries, bouncing around from their less-than-firm opinions of one another – the absurdity of their connectivity is one that befriends the magnetism between the polar personalities of their lovers, played by Bennett and Blutcher.

Now that the youthful opposition of Hair has closed at State College’s Downtown Theatre Centre, a riotous chuckle emerges from the soon-to-open cast of 11 in “Earnest” – deservingly getting the last-laugh in Penn State’s 2015-16 School of Theatre lineup.

The Importance of Being Earnest plays through April 23, 2016 at The Pavilion Theatre in State College, Pennsylvania. For tickets, call the box office at (814) 863-0255.