This year, The John F. Kennedy Center for the Performing Arts began an innovative concert series called KC Jukebox, curated by The Kennedy Center’s first proclaimed Composer-in-Residence, Mason Bates. The program is described as a series of concerts that “will spotlight the works of living composers as filtered through Bates’ signature re-imagining of the classical music experience.”

The most recent installment, titled New Voices Old Muses, was the third KC Jukebox program and took place in The Kennedy Center’s Atrium. The space had a night-club feel, complete with fog, scattered sofas, and dimmed lighting. In the middle of the room, a platform stage was set with a wide array of instruments, while in the far corner DJ Masonic (Mason Bates) and electronic violinist, Dominic Johnson, set the mood with soft, soothing electronic music.

The audience was primarily standing room only and, before the performance began, everyone milled about, talking in hushed tones, and embracing the comfortable, party-like ambience. Focus turned to the stage as the show began and each piece was introduced with a projected video of the composer, explaining how the piece was constructed and the inspiration behind it.

The first set, Bagatelles for String Quartet and Electronica, was composed by the host himself, Mason Bates. The set was comprised of short pieces with electronic sounds and classic inspirations, exemplifying the overall theme of the concert, defined as “innovative responses to old forms, poetry from the distant past, and ancient instruments.”

There were two tremendous vocal pieces, both drawing their lyrics from renowned poets of the 19th and 20th century. The first was Anne Clyne’s As Sudden Shut, inspired from Emily Dickinson’s poem, “A Door Just Opened on a Street.” The music was heavy and dark, a perfect marriage to Dickinson’s words:

The door as sudden shut, and I,
I, lost, was passing by,–
Lost doubly, but by contrast most,
Enlightening misery.

Clyne’s music was hypnotic, with transient discords and the incredible vocals of sopranos Ariana Wehr, Mandy Brown, and Lucy Dhegrae.

Poet W.B. Yeats, was the inspiration behind Donnacha Dennehy’s That the Night Come. Mezzo-soprano Rachel Calloway filled every corner of the atrium with her powerful voice and brought the lounging audience to their feet at the end of Dennehy’s song cycle.

Also featured, were Edmund Finnis’ artistic In Situ, and Sit and Dance for Baroque Cello and Electronics, by Molly Joyce. Rachel Young performed Joyce’s set as a solo musician, playing the cello with impressive intensity and precision, accompanied by pre-recorded electronic tunes.

The program was masterfully conducted by Donato Cabrera and concluded with a post-concert party, again featuring DJ Masonic (Mason Bates) and  Dominic Johnson on electronic violin.

KC Jukebox’s next season will begin Monday, October 24th at 7:30pm.  The first series, titled Mercury Soul, is being described as “an immersive performance that blends classical music, DJing, and imaginative stagecraft.” If KC Jukebox: New Voices Old Muses offers any clues as to what to expect for next season, the inviting nature of the atmosphere, accompanied by the modern and classic musical coalescence, promises to be an experience to remember.

Running Time:One hour, with no intermission. 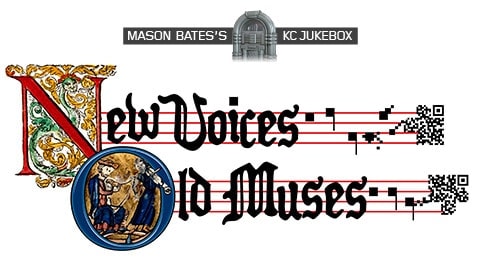 New Voices Old Muses played for one night as a part of the KC Jukebox series at The John F. Kennedy Center for the Performing Arts – 2700 F Street, NW Washington, DC. For more information on upcoming KC Jukebox shows, go online, and for general information and events at The Kennedy Center, visit their website.