“Crimes of Passion” have always stimulated audiences, and America in the 1920’s had one of the great ones. Ruth Synder killed her loathsome husband with the help of her boyfriend. Both were convicted and electrocuted which caused a furor, as the criminal was a woman. (This is no spoiler, as Ego Po Classic Theater’s program tells you this up front. It’s actually easier if you know the background.) One of many artistic dramatizations of this headline inducing event was Sophie Treadwell’s Machinal, a critical success and audience failure on Broadway in 1928.

The author had much more in mind than dramatizing the above case. Machinal remained obscure until the early 80’s when Applause Books published Plays by American Women. Modern readers discovered a striking pre-feminist work that has since been revived many times.

Treadwell herself best sets the scene in the published play’s introduction:

The Plan is to tell this story by showing the different phases of life that the woman comes in contact with, and in none of which she finds any place, any peace. The woman is essentially soft, tender and the life around her is essentially hard, mechanized. Business, home, marriage, having a child, seeking pleasure – all are difficult for her – mechanical, nerve nagging. Only in an illicit love does she find anything with life in it.

Machinal was much inspired by the then current German Expressionism, which influenced such memorable American plays such as The Emperor Jones, and The Adding Machine. But this one was the first to use a woman as the protagonist. Though more an indictment of the rigidity of society, the feminist themes shoot like bullets throughout. A woman is the property of men, used to fulfill whatever roles men deem appropriate.

Expressionism means that the point of view of the leading character is emphasized, usually in a highly distorted from. Huge, overwhelming sets, bizarre costumes, rhythmic dialogue, sound effects, and eccentric lighting create the world of the suffering leading character, here known only as “Young Woman.” The remaining characters remain archetypes (secretaries and speakeasy customers) usually given names such as “First Man” or “The Lover.” Anyone wanting a more realistic Synder story can turn to the famous novel and film Double Indemnity.

Ego Po’s production directed by Brenna Geffers uses some – but not all – of the expected devices. The well-drilled ensemble sings and often dances constructivist choreography, while clicking-clapping noises emit from the sound system and from the cast, speaking and gurgling into onstage microphones. Smoke covers the stage at all times, and the acting emphasizes the non-realistic dialogue. The result is certainly unique if not completely successful.

The other major player is Production Designer Thom Weaver who masterminded the set, costumes, lighting and sound. The stage is a large slab of polished metal that divides the football-grouped audience in the small black box theater upstairs at the Latvian Society. The setting itself is nonexistent, featuring folding chairs, a radio, a metal table on wheels, and, off to one side, a bank of microphones on stands. There are no props. Actors smoke invisible cigarettes and drink invisible drinks. But there are flowers. Many of them. It is frequently difficult to discern the locations Treadwell demands, and this staging is less effective than the traditional huge onstage machine framework.

Each ensemble member is given a basic dull colored costume that suggests the 1920’s in which the story is set. Imaginative accessories help create the grotesque atmosphere: the midwives deliver babies wearing police riot masks, the trial justices are blindfolded, and the executioners wear repulsive gas masks. The leading “Young Woman”, played by Mary Tuomanen, stands out from the crowd with a shiny platinum 20’s bob and a bright blue dress. The effect is impressive except that the original play calls for many more performers than the nine-member ensemble employed here.

The smoke filled lighting suits the various moods, and Weaver has no qualms about blinding the audience. The soundscape is not city-noise realistic, as Treadwell intended, yet be prepared for an unworldly cacophony, strange music and distorted versions of “Happy Days Are Here Again.”

The ensemble is constantly surrounding Toumanen with cranky choreography designed by the director and Peter Andrew Danzig. Some of it is fascinating, some confusing, some annoying. The result becomes not so much Treadwell’s indictment of society, as the hallucinations of a pathetic madwoman. The feminist themes are submerged beneath the smoke and movement presenting an interesting “Thorazine dream.”

The actors are game and capable, with Chris Anthony most impressive as the young lover. He projects a relaxed, sensual masculinity that actually calls to mind the role’s original performer, Clark Gable. (And that’s a real compliment.) Mary Tuomanen brings an impressive stage presence and rich vocal quality to the role of “Young Woman.” She is especially touching in the first act as she flees a boring office job into the arms of a new husband that she finds repulsive. Ross Beschler is good in this part with his chauvinistic comments and bad jokes. Tuomanen‘s second act has difficulties as she strikes few sparks with the young lover, and not believable to me as a passionate murderess. This is partly Treadwell’s fault and she does not allow the heroine to become a fighting modern feminist. Young Woman remains calm and enigmatic throughout the ending scenes, which resulted in a loss of my empathy and involvement.

The Latvian Society has a full bar on the first floor and many audience members had beers and drinks in hand by the second act. Good idea. A couple of good belts can make Machinal a lot of fun.

Running Time: 2 hours, with an intermission. 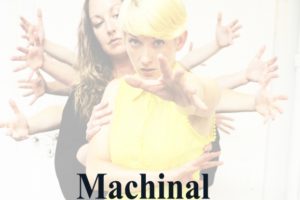 Machinal plays through May 8, 2016 at Ego Po ClassicTheater performing at The Latvian Society – 531 North 7th Street, in Philadelphia, PA For tickets call the box office at (267) 273-1414, or purchase them online.