It’s not every day that the world’s greatest entertainer asks the President to become an undercover narcotics agent (and the badge that goes with it, of course). Up until Elvis did it, it wasn’t any day that such a thing happened. Elvis & Nixon turns that bizarre ask into a fascinating little movie that follows the twists and turns of how the most requested photo in the National Archives came to be.

When two heavyweight actors sign up for a project playing gigantic personalities, there is some worry that the result will be a steady diet of scenery chewing. The film does not begin promisingly on that front. Kevin Spacey hunches his shoulders and lets his jowls hang and you cringe a bit as Spacey ticks boxes on the “Play Richard Nixon” checklist. Michael Shannon, playing Elvis, dressed extravagantly in black and gold, shoots his TV, apparently angry at the flag burning and drug taking of 1970’s youth. But then Elvis walks up to a pretty girl working the graveyard shift at an American Airlines counter (Pretty Little Liars star Ashley Benson, wide-eyed and starstruck) speaks softly, smiles, and charms his way onto an airplane bound for Los Angeles, guns and all, and we get the sense that Director Liza Johnson has something more subtle in store for us.

The first act of Elvis & Nixon doesn’t do more than show flashes of promise, though. It’s jerky and jangles with an aggressive jazz score and pop song soundtrack that is almost too explicitly not Elvis music as it bounces from expository scene to expository scene, the most important of which introduce us to former Elvis inner circle member Jerry Schilling, played with understated charm by heartthrob-in-training Alex Pettyfer. The movie settles down once Elvis arrives in DC and drives up to the northwest gate of the White House to leave a letter for the President. That’s when we are treated to the full Elvis charm offensive in his single-minded pursuit of a quixotic goal that only he understands, with a solid assist from Jerry, whose primary job is to maintain the borders of Elvis’ reality distortion field.

The film, wisely or not, doesn’t attempt to explain how Elvis generated this wacky idea of becoming an undercover federal agent-at-large. The film does, however, attempt to give us an idea of why he generated it. At one point, Elvis, played with such calming, sincere perfection by Shannon, finished with his skin and hair regimen, puts on his sunglasses and explains why he needs Jerry, why he needs a friend who sees Elvis as a person and not someone else’s idealized memory of their first kiss. It’s an astute, if obvious, point delivered with such simple humanity that it provides us with a tiny grain of insight into the contradiction between Elvis’ ability to connect with people and the obvious distance between his view of the world and our own.

Elvis Aaron Presley was ruined by the Elvis Bubble, obliterated by people’s perceptions of ELVIS. It’s not a new dissection of fame, but in the hands Johnson and her screenwriters, Joey Sagal, Hanala Sagal, and Cary Elwes (yes, that Cary Elwes), it’s an effective glimpse at one person’s experience of mega stardom levels of fame. 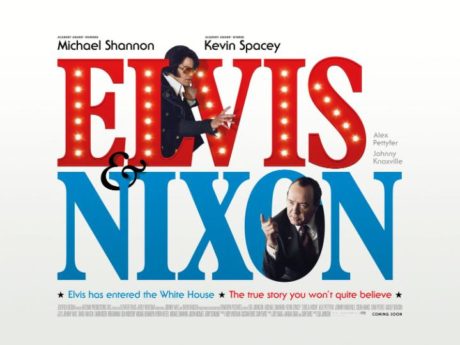 While the film is primarily about Elvis, the film hardly neglects Nixon. Casting Kevin Spacey as Nixon is a stroke of meta-brilliance. You could argue that Frank Underwood as an outrageous caricature of power-hungry politicians is only possible because of the actual person of Richard Nixon. Nixon is Frank Underwood with more racism and no Southern accent, so Spacey doesn’t have to work too hard to slip into Nixon’s thin skin. Spacey combines broad theatricality with smaller gestures that really sell that toxic combination of self-assuredness and gnawing doubt that animated Richard Nixon. Their meeting in the Oval Office is something special. It doesn’t have the stakes of Pacino and De Niro in that diner in Heat, but watching Elvis systematically build a reality distortion field around Nixon is an impressive display of acting craft. Nixon is unwittingly brainwashed by Elvis before our very eyes.

The movie flags whenever Elvis or Nixon are not around. That is fortunately rare, but there is just a bit too much focus on whether or not Jerry can resist the gravitational pull of planet Presley to make the ending satisfactory. The meeting ends and it has absolutely no consequences in the real world and then the movie ends. Elvis remains a charismatic, complicated enigma. The film reminds us in the end that many of the people we rooting for, who were trying so hard to put Elvis and Nixon in the same room, like Colin Hanks’ fresh-faced Bud Krogh, would go to jail for their part in organizing the Watergate break-ins. Elvis got his badge, though he (probably) never used that authority. We are left with no sense of who Elvis was or what he really wanted. We have no idea why any of this happened, but I have to admit, it sure was fun hanging out with Elvis.

Elvis & Nixon is in theatres now. Check your local listings (but mostly check E Street Cinema in DC or Harbor East in Baltimore).