“It is terrifying.” More often than not, the actor’s relationship to their audience involves three parties; the audience, the actor, and their character. Guarded by learned lines and blocking, an actor can help to tell a larger story. What’s different about the Arden Cabaret Series is the chance to interact with the artist and their own intimate story without the safety net of a character or playwright, which is exactly what caused Philadelphia actress Kristine Fraelich to begin her own cabaret by admitting the simple truth of just how frightening it can be.

Fraelich will be most familiar to Philadelphia audiences from her work at the Arden Theatre Company’s productions of Sunday in the Park with George, Next to Normal, and Baby Case, or from her most recent turn as Mama Rose in Media Theater’s production of Gypsy. Before returning to southeastern Pennsylvania years ago, she began her impressive career with two years as the Narrator in the first national tour of Joseph and the Amazing Technicolor Dreamcoat as well as the brief Broadway run of Frank Wildhorn’s The Civil War.

Fifteen years after her last cabaret, however, Fraelich now summoned the courage to take to the microphone once again to tell her own story in her own words on the intimate stage of the Arden Theater Company’s Hamilton Family Arts Center Studio Theatre. A small venue, as all cabaret venues should be, the Studio Theatre sets the mood with paper lanterns draped in scraps of fabric and candles flickering on the cafe table seating arrangement. And even though this leading lady admits to having little to no affection for cabaret as a medium, she said yes immediately when offered the chance to challenge herself once again.

Putting aside her epic musical talent, Fraelich derives no small amount of her charm from her frankness. She proudly gave a glimpse of the notecards and script she held close at hand after joking about how badly she flubbed some of Sondheim’s lyrics the night before. She confessed that dog-walking in New York City was one of the best jobs she ever had. She shared honestly about her children, career struggles, and life choices, all while flanked by a large scale copy of her face in the Gypsy publicity shots, most recently seen in billboard form, she reminded us, on the I-95 corridor.

But her casual nature is only made more endearing by the precision with which she handles her instrument. Her sound is crisp and shimmery, moving with agility through songs like “Don’t Rain on My Parade” or “Everybody Says Don’t.”

And yet it is the larger, broader tunes like “Move On” or “I Miss the Mountains” where she makes music soar in a way you’ve never heard before with a uniquely powerful upper range that seems to go on for miles.

The evening’s most memorable moment came late in the set list, when Fraelich shared about her father whom she has recently lost, with stories delicately interspersed within “Telephone Wire” from the current Broadway hit Fun Home, made all the more heart-breaking when joined by her teenage daughters. There’s no doubt where the two get their talent from, gracefully completing an emotionally powerful trio to recall a father’s pride for his gifted daughter.

Still in its inaugural year, The Arden Cabaret series is helmed by Director and Associate Artistic Director Matthew Decker. He related an anecdote of watching Krissy silence a huge crowd at an event at the Piazza in Northern Liberties with just her voice, which is not at all surprising once you’ve heard her sing. The evening was masterfully accompanied by Musical Director and arranger Peter Hilliard and intermittently included the immensely talented Justin Yoder on the cello.

Krissy Fraelich’s talent is a force to be reckoned with, and even though she mourns the ingenue roles she’ll never get to play in a comical version of “What I Did for Love,” her abilities and sensitivity remain astounding in every way. Her story includes the familiar tough decisions and possible regrets of living the dual life of parenthood and artistry, but what comes to the surface is the everlasting truth that the journey continues and just keeps getting better and better. 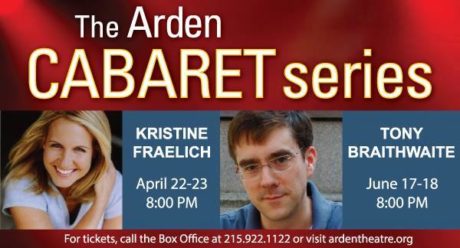