The 2016 Oscar Hammerstein Festival, being held this weekend at the Bucks County Playhouse, brings together a wide array of musical theatre artists, scholars, and enthusiasts to explore the importance of lyrics in the creation of musicals.

Among the highlights will be two concerts that celebrate two different generations of lyricists.

On Friday April 29, 2016 the festival kicks off with New Songwriters Tonight!, an evening focusing on up-and-coming writer Adam Gwon.

Then on Saturday April 30th, it’ll be Don’t Ever Leave Me: The Love Songs of Oscar Hammerstein II, a special concert that benefits the Playhouse and its musical theatre development programs.

Both concerts will have one performer in common: Santino Fontana, who has been especially busy lately. He’s found success on film, as the voice of the villain Prince Hans in the Disney blockbuster Frozen; on television, where he’s been showing off his musical comedy chops as Greg on CW’s Crazy Ex-Girlfriend, as well as playing a detective alongside Jennifer Lopez on the NBC cop drama Shades of Blue; and on Broadway, where he went from playing the Prince in Rodgers + Hammerstein’s Cinderella to playing Moss Hart (a writer who, like Hammerstein, spent time working at the Bucks County Playhouse) in Act One.

At the Friday night show, Fontana will be sharing the stage with his wife of seven months, Jessica Fontana (also a veteran of Cinderella), as well as singer Kate Wetherhead.

And Saturday night’s show will reunite him with his two co-stars from Cinderella, Victoria Clark, and Laura Osnes, plus Lewis Cleale, who’s currently on Broadway in The Book of Mormon.

“I think what’s great about this weekend,” Fontana says, is that Producer Robyn Goodman, “wants to focus on lyricists and how often they’re overlooked.” And a good way to do that is to focus on Hammerstein – “the grandfather of this whole art form,” in Fontana’s view.

Hammerstein supplied the lyrics to some of the greatest love songs ever written. “You know, he wrote ‘People Will Say We’re in Love,’ ‘Only Make Believe,’ ‘If I Loved You’… we still have that [type of] song today even in pop music,” notes Fontana. But what makes Hammerstein’s work relevant today is how he stretched the limits of acceptability by dealing with the dark side of human nature.

“‘You’ve Got To Be Carefully Taught,’ ‘A Cockeyed Optimist’ – people could argue it’s too easy, it’s too clean, but then he’s able to give you the undercurrent of what’s really going on. And that was just not done” at the time, Fontana says. “If you look at the Cole Porter revues and all that other stuff – no one was doing that, no one was interested. It’s exciting” to be performing Hammerstein’s work at the Saturday concert.

He’s also looking forward to being reunited with his Cinderella co-stars on Saturday. “We’re always looking for something to do together. So it’s always fun to get the family back together. And Vicki [Clark] sang at our wedding. So it’ll be like going back and hanging out with friends.”

Friday night’s show gives Fontana and his wife Jessica an opportunity to sing the work of Adam Gwon, a composer and lyricist best known for the off-Broadway musical Ordinary Days.

“I’ve sung for Adam a bunch of times in various concerts. My wife and I actually sang a song of his from Ordinary Days called ‘Fine’ that he then put online (watch it below).

So I was familiar with his music, and I’ve always been a fan of his writing. And he’s writing something right now with another friend of mine who’s writing the book, which is exciting to me. I’m a fan of his. So I’m happy to be able to be a part of it.”

While television is keeping Fontana busy – Crazy Ex-Girlfriend has been renewed for a second season – he continues to find time for concerts like the ones this weekend. And a few weeks ago he gave a terrific performance as John Adams in the Encores! production of 1776 at New York’s City Center.

“I had a great time doing that,” Fontana says of 1776, which – like all the shows in the Encores! series of staged concerts – was performed after only two weeks of rehearsal. “It was brief and frightening, but it was good.”

At an audience talkback after a matinee performance of 1776, William Daniels – who originated the role of John Adams on Broadway and on film – made an appearance. When Fontana came onstage, he bowed at Daniels’ feet as the audience cheered.

Daniels and his wife Bonnie Bartlett “came backstage afterwards, and they were incredibly generous. They loved it and they loved what we did with it.” That came as a relief, since Fontana had been “terrified” to perform the role in front of Daniels.

“His wife kept saying ‘How long did you rehearse this? How is that possible?’ He went out of town with it – he had lived with it for months and months and months before it opened on Broadway, whereas we’re doing it for a couple weeks.”

In the end, Fontana says that despite his jitters, “It was exciting to get [Daniels’] approval.” And now he’s looking forward to being part of the Hammerstein Festival.

“I’m excited to be able to lend my voice to celebrating this,” he says. “It’ll be fun.” 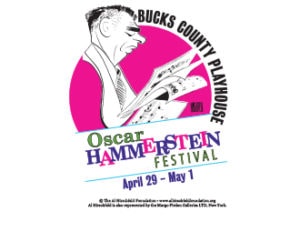 All photos are courtesy of Bucks County Playhouse.