A Lovely Sunday for Creve Coeur is one of Tennessee Williams’ lesser-known plays. First staged in 1978, a few decades after his biggest successes, Creve Coeur has echoes of Williams’ best-known works, but with some touches of comedy added.

Set in Williams’ native St. Louis in the 1930s, Creve Coeur tells the tale of two unlikely roommates: Bodey Bodenhafer, an earthy, middle-aged German-American woman, and Dotty Gallaway, a delicate young high school teacher. They have little in common, and as the play opens, Bodey is preparing food for a picnic the two are planning to have that afternoon at nearby Creve Coeur Park. Also invited is Buddy, Bodey’s oafish, overweight, beer-swilling twin brother. Bodey hopes Dotty will marry her brother, but Dotty, who regards marriage to a successful man as the path to success, has no interest in him. Instead she has her sights set on Ralph, the principal of her high school. (We never get to see either man.) When Dotty reveals she had sex with Ralph in his car, Bodey is scandalized, but Dotty is proud: “My life must include romance,” she says.

Soon an arrogant young woman named Helena arrives. Helena is there to collect rent money from Dotty; the two have planned to move to a larger, nicer apartment, the better to impress Ralph. But Bodey will do anything to make Dotty stay. And then a fourth woman appears: Miss Gluck, a neighbor who speaks only German and adds to the general sense of chaos.

Anyone familiar with Williams’ most famous plays will recognize the character types in Creve Coeur. There’s a fragile, delusional young woman (like Laura in The Glass Menagerie); middle-aged ethnic women (like Serafina in The Rose Tattoo); and a snob obsessed with formality and social standing (like Blanche in A Streetcar Named Desire). Bodey even keeps a porcelain frog on her mantle, an echo of Laura’s menagerie.

But one big difference between Creve Coeur and those other plays is that in this one, the dramatic stakes never feel especially high. No one’s life is shattered at the end of Creve Coeur; the worst that happens is that a few people feel embarrassed. The play’s tragedy – Dotty’s fear that she may have to settle for a man she doesn’t love – is only dealt with briefly.

Another difference is that Creve Coeur has a good deal of comedy. Helena is a comic character whose snobbery makes her seem foolish, and she’s the object of derision throughout the play. Characters talk over each other, which leads to misunderstandings. And there’s a surprising amount of slapstick humor – we see people getting splashed with water and plastered with white, powdery baking soda. While that sometimes makes the play come off as unnecessarily silly, it also helps to give the play an enjoyably light tone.

Director Connie Norwood’s production is so frantic at times that it can be puzzling; it takes too long to figure out exactly why Helena and Miss Gluck are there. But she builds the tension convincingly, and stages the comic moments for maximum impact.

Lee Kiszonas holds everything together as Bodey, whose indomitability keeps the household together. McKenzie Jones Clifford is a pleasing, gentle presence as Dotty, and Sheila W. Kurilla is touching as the often wordless, and sometimes whimpering, Miss Gluck. And Laura Aspen is wonderfully smarmy as Helena.

A Lovely Sunday for Creve Coeur takes place in a cramped apartment, but due to the limited playing space of South Camden Theatre Company’s stage, Robert Bingaman’s set design is too cramped for its own good. There are moments when characters in the living room have to pretend they can’t hear characters in the kitchen, even when they’re only about two feet away. And the bathroom door in Dotty’s bedroom seems to lead not to the bathroom but to the front hallway; eliminating that hallway, and moving the front door to where the audience can see it, would have helped to avoid some confusion.

A Lovely Sunday for Creve Coeur is a fascinating exploration of some of Williams’ most frequent themes. And it’s been given a lovely production at South Camden Theatre Company. 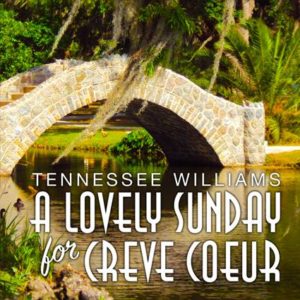 A Lovely Sunday for Creve Coeur plays through May 15, 2016 at South Camden Theatre Company, performing at The Waterfront South Theatre – 400 Jasper Street, in Camden, NJ. For tickets, call the box office at (866) 811-4111, or purchase them online.