Exactly one century ago, on Easter Week 1916, Irish nationalists staged uprisings in Dublin and some surrounding areas in defiance of centuries of British rule, and in particular their conscription in the faraway and bloody trenches of World War I. The thousand-odd “Irish Volunteers” (who, after Independence in 1919, would be known as the IRA) were swiftly crushed by an overwhelming number of British forces, and many of the insurrection’s leaders were executed. However, the so-called ‘Easter Rising’ became a catalyst for the flowering movement for Irish independence, and is now a staple of the postcolonial Irish identity.

Wild Sky, a terrific new play by Deirdre Kinahan, now playing at Solas Nua, tells the dramatic tale of the ‘Easter Rising’ through the eyes of two young, fictional participants: Josie Dunn (Megan Graves), a spitfire suffragette who becomes immersed in the world of feminist Irish nationalism even as her physical well-being deteriorates; and Tom Farrell (Dylan Morrison Myers), a passionate romantic who fights alongside the Volunteers more out of his love for Josie than for any particular ideology, but who becomes disenchanted by the indiscriminate violence he sees perpetrated by both sides.

Deirdre Kinahan deftly spins a tight narrative that consists almost entirely of monologues by Josie and Tom. The language is deeply poetic, searingly personal, and at times nothing less than sublime. Kinahan’s language is animated by blow-out performances by Megan Graves and Dylan Morrison Myers, who was nominated for a Helen Hayes Award in 2015 for his turn as another disturbed Irishman in Terminus at Studio 2nd Stage, is thoroughly engrossing as the tormented and love struck Tom. Megan Graves is equally compelling as the indefatigable Josie, as she turns charming and deadly serious.

Director (and Solas Nua Artistic Director) Rex Daugherty makes a critical decision to supplement this dramatic duopoly with a trio of lasses (Beth Aaman, Daven Ralston, and Ashley Zielinski). Daven Ralston takes the lead on playing a lively fiddle, and Daugherty himself even enters the production a few times to strum a traditional Irish drum called a bodhrán. All three ladies sing classic Irish independence ballads like “The Wind That Shakes the Barley.” Their contributions of music, song, and movement add a crucially important thematic texture to the show.

But the most remarkable thing about Wild Sky isn’t it’s good writing, clever direction, enchanting music, or terrific acting. It’s the fact that the play is staged in an actual living room of a private house. Two houses, actually, depending on which weekend you see it. For obvious privacy concerns, we can’t disclose the addresses here, but they are available upon purchasing tickets. However, I can say that the location I attended was a beautiful and evocative environment to showcase the piece.

The living room itself was ideal for a small performance, to the point where I had the brief notion, quickly dispelled, that this might be a designated rehearsal space for a professional theater. But no, a quick glance at the host’s kitchen and front porch reveal that this is indeed someone’s home. This site-specific nature is supposed to hammer home the feeling of proto-nationalist Ireland, when banned Gaelic and dying cultural traditions were furtively taught inside private homes outside the prying eyes of British soldiers. Indeed, sitting in a three-sided arrangement with only a few dozen other audience members on wooden folding chairs around a tiny (but brilliantly designed) playing space felt a little subversive, like we were all participating in guerrilla theatre. I found this speakeasy style staging by Solas Nua very intriguing, and possibly indicative of where live theatre can go in order to compete with the likes of football and Netflix.

Despite the challenges presented by such a space, Scenic Designer Paige Hathaway is able to craft a tiny but evocative multi-purpose platform plastered with reproductions of Irish nationalist newspapers from that time. Lighting Designer Marianne Meadows uses a squad of portable lights to create a surprisingly robust design. Costume Designer Robert Croghan brings authentic early 20th century Irish wardrobes to the production.

By staging Wild Sky, a play already inclined towards the intimate, in a private house, director Rex Daugherty constructs a genuinely alternative environment for a brief 60 minutes. He turns the audience into collaborators and the actors into spiritual storytellers. Even with the Irish ambassador herself in attendance, the event seemed profoundly humble. This was fitting for a revolution that stirred in living rooms, in small groups, where passionate people captured hearts with their words. 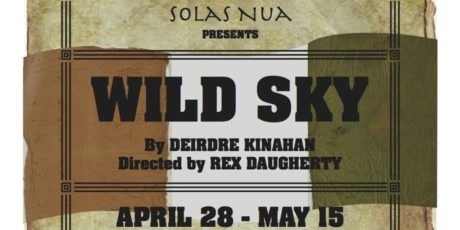 Wild Sky plays through May 15, 2016 at Solas Nua, performing at two private residences in Washington, D.C. For location information and tickets, go online.