Director/creator Michael Durkin takes his inspiration for The Renegade Company’s latest site-specific performance, In the Community Garden of Earthly Delights, from the famous painting by turn-of-the-16th-century Dutch artist Hieronymus Bosch. Presented in partnership with Spirit Forward, the immersive event is in the format of a choose-your-own-path promenade-style pop-up cocktail party in which the audience is transported into the weird world of the artist’s imagination, while walking through the Southwark/Queen Village Community Garden in South Philadelphia. Along the way, participants sample original craft drinks by mixologist Dan Hamm and encounter a strange assortment of figures and motifs from Bosch’s masterpiece come to life.

Circa dated to the 1490s, at a troubled time when contemporary millennialists were predicting the end of the world in 1500, Bosch’s visionary triptych traces humankind’s road to ruin, from the Biblical Creation in the left wing, to the hedonistic behavior in which people engage during their lifetime on earth in the center panel (the eponymous Garden of Earthly Delights), to the punishments suffered in Hell on the right.

Filled with fantastic hybrid creatures, over-sized flora, fauna, and laboratory beakers, and scenes of debauchery in an odd landscape, Bosch’s bizarre imagery, symbolism, and meaning have long been the subject of art historical debate. Popular interpretations include everything from the artist’s hypothesized membership in the heretical Adamite sect (a paradisiac group dedicated to partaking of the pleasures that Adam and Eve enjoyed in the Garden of Eden), to experiments by alchemists to create the legendary Elixir of Life (through the mixing of elemental opposites), to the effects of ergotism (a rampant disease caused by ingesting rye and other grains infected with ergot, a fungus that contains lysergic acid–the same active ingredient in LSD–and causes hallucinations, spasms, and death), to proto-Protestant moralizing (with an implicit warning not to engage in such sinful libertine activities, which will lead to eternal damnation).

Renegade’s event conjures the phantasmagoric mood, the sensory indulgences, and the questions of justice and judgment portrayed by Bosch. An ensemble of eight—Lesley Berkowitz, Erin Elizabeth Carney, Donna Jean Fogel, Lisa Fischel, Paloma Irizarry, Sterling Melcher, Devin Preston, and Dani Solomon–employs dreamlike movement and mime, live and recorded music, the sounds of nature and an enigmatic conversation with a mysterious oracle in a series of arcane episodes throughout the garden.

The vignettes are all self-devised, based on prompts given to the cast by Durkin, and partly improvised, in response to interactions with the audience. Interspersed between the scenes are stations of food (including luscious desserts by Ne Cakes?) and drinks by Spirit Forward (Eve’s Punch, The Prince of Hell, The Looking Glass, and Corrupt Garden), all paying homage to Bosch’s themes and made from natural garden ingredients and fine liquors that aid in transporting you to an altered state of consciousness–much more safely and delightfully than ergot would!

Running Time: Approximately one hour, at your own pace. 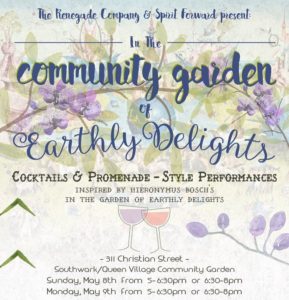 In the Community Garden of Earthly Delights plays through Monday, May 9, 2016 by The Renegade Company, performing at the Southwark/Queen Village Community Garden – 311-15 Christian Street in Philadelphia, PA. For tickets, purchase them online.