School shootings are inexplicable. A high school used to be an open welcoming location. Today they are locked-down prisons, intently suspicious of any unusual activity. Any play that tries to understand this phenomenon should be seen.

Australian playwright Declan Greene describes the play Moth like this: “PLACE, which is also TIME: two separate memories of a specific timeframe.” There is no story, or location, just a poetic stream of consciousness abetted with strange sounds, unusual lighting, and a set that just may visualize the images in the teenagers’ minds.

The two-character play tells of  Claryssa, (Hannah Parke) and Sebastian, (Nicholas Scheppard), 15-year-old high school students who are at the bottom of the school food chain. She has definite Goth tendencies, (purple-ratted hair and dark eyeliner) while he is a sexually confused manga addict. Their stories are told through recitations of poems, dreams, and imaginings. The fine line between youthful confusion and mental illness is continually blurred. Claryssa dreams of dropping a bomb on the school and watching everyone die. Sebastian spends the final third of the play wearing a red backpack that he says, and actually may, contain a bomb.

Greene is quite a poet. There are frequent moments of impressive imagery that accurately plot the bewildering loneliness of growing up. Sometimes the play stops for long verse speeches as the teens enact visions and dreams. In one, the boy identifies with Saint Sebastian, who was brutally martyred, which he finds similar to a viscous gay bashing he has received from his classmates. He captures a moth and carries it everywhere in a jar. He calls it Saint Sebastian. You get the idea.

Audiences will be divided by this experience. Adults who believe teenagers are self-absorbed whiners will have that prejudice confirmed, and will find the writing overdone and excessive. However, anyone who has ever spent an hour with a 15-year-old emo-obsessed poet, (where every life incident is a Greek Tragedy and every emotion is vitally transcendent) will realize how right-on Moth is.

Michael Osinski has directed a vital well-acted production. Both Parke and Scheppard are totally committed, have trained voices, and deliver stirring physical performances. The relationship is deeply complicated. They seem to be close friends, though they claim they don’t care about or need each other. He seems to be gay, though they end up clumsily groping and making out. Other characters, teachers, parents, students appear throughout and these are clearly delineated by the two. They experience a number of wretchedly emotional moments, though the play’s lack of structure impedes any real audience sympathy. Once a year, Azuka gives new conservatory graduates an opportunity to headline a new play as part of their “New Professional Production.” Both artists are recent University of the Arts graduates.

Osinski’s staging is quick and varied especially considering that the small black box (60 or so seats) has no real set. Set Designer Apollo Mark Weaver has designed a mobile that is more work of art than a theatrical representation. Creations resemble a part of a bed or a chest of drawers or a strangely askew window. The costumes (Kayla Speedy) are ratty school uniforms, while the lighting (Alyssandra Docherty) and sound (Damien Figueras) powerfully reflect the turmoil of the youngsters.

Moth is not an easy play to experience. The director and, I suspect, the playwright have no intention of delivering a clearly articulated evening that offers clear answers to the many questions posed by the play. I recommend it with this suggestion: NO ADULT OVER 30 WILL BE ADMITTED UNLESS ACCOMPANIED BY A TEENAGER. 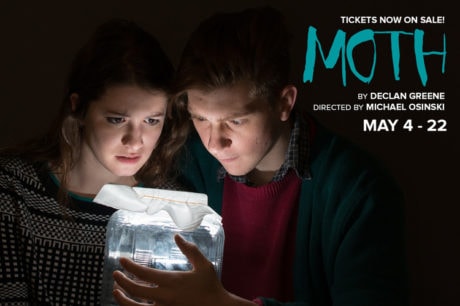