2016 Man of the District Announces Featured Performer, Judges, and Contestants

Nicholas Rodriguez – Actor and singer. Nick is perhaps best known for the role of Nick Chavez on ABC’s One Life to Live for which he received the GLAAD Media Award, the 2009 Visibility Award, and, along with his co-stars “Men of the Year.”

Recently he starred opposite Kathleen Turner in Mother Courage and Her Children at Arena Stage in Washington, DC where he recently played Freddy in My Fair Lady, Fabrizio in The Light in the Piazza, and was also seen as Curly in Oklahoma! for which he received a 2011 Helen Hayes Award for “Best Actor in a Musical” and was named “Top 10 Performers of 2010” by Hilton Als of The New Yorker.

He made his Carnegie Hall debut in a one night only concert version of Guys and Dolls starring Nathan Lane, Megan Mullally, and Len Cariou.

On the big screen, Rodriguez was seen in Sex and the City 2. He is also featured on the film’s soundtrack. Check his website.

2016 Man of the District Judges

Wendy Rieger– Three-time Emmy Award-winning Anchor of News4 at 5. A native of Norfolk, Rieger graduated from American University with a degree in broadcast journalism. Her community involvement has spanned many local organizations, including those dedicated to fighting cancer, protecting animals and promoting human rights.

Anastasia Dellaccio– Director of Marketing and Communications for Sister Cities International. Dellaccio works to build support and awareness around the organization’s mission of connecting people and communities around the globe to foster peace and understanding.

Kirstin Franko– Director of Media Relations for the Tony Award-winning Arena Stage at the Mead Center for American Theater. Kirstin is also an independent business entrepreneur and Star Stylist with Stella & Dot, an international fashion and accessories company.

The Man of the District Contestants

Each Man of the District contestant will present a 90–second talent of his choosing, model business wear, and answer an impromptu interview question related to the District. Half of the available points for competition are awarded for fundraising efforts and advance ticket sales.

Here are the Contestants: 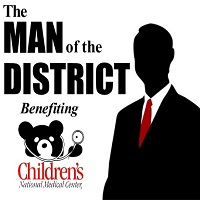 Man of the District is a 5-year-old event that has raised more than $70,000 for Children’s National with every dollar staying in the District. Funds support research and training, purchase equipment, and pay for uncompensated care, all in support of the center’s mission to save and improve the lives of as many children as possible.

Competition will begin at 7 p.m. Each candidate will present a 90-second talent of his choosing, model business wear, and answer an impromptu interview question related to the District. Half of the available points for competition are awarded for fundraising efforts and advance ticket sales.

The Man of the District competition is produced by Don Michael Mendoza, Executive Artistic Director of the La-Ti-Do.