A phoenix arises! The New Freedom Theatre is back with a solid professional production. After many seasons of darkness, except for their acclaimed theatre school, the lights are on again with a poetic rumination on a tragic theme, as well as two upcoming musical revivals.The John E. Allen, Jr. Theatre at Broad and Master Streets, is a beautiful gem, one of Philadelphia’s finest performance spaces.

The Ballad of Trayvon Martin by Rajendra Ramoon Maharaj and Thomas J. Soto is a poetic docudrama inspired by the death of teenager Trayvon Martin inside a private gated community in Florida. Martin was shot and killed by George Zimmerman, a white neighborhood watch volunteer. With Florida’s now famous “Stand Your Ground Law” in place, Zimmerman was unsurprisingly acquitted in the murder trial. Trayvon was clearly not the dangerous thug that the shooter made him out to be. Instead of a gun, he held a bag of Skittles. His dream was to one day become a pilot. Instead, it is his legacy to be known by millions of Americans as a symbol of just how tough it is to be a young black man in this country.

The play takes a docudrama approach, featuring rap, dance and a good deal of dialogue from the public record. We hear from Martin’s bereaved parents, the shooter, the prosecutors and defense attorneys in the trial, as well as many celebrities such as Bill Maher, Spike Lee, and President Obama. This is presented as an imaginative free form poem. In the first scene, the newly dead Martin has no idea who Emmett Till was. He gets a quick lesson as a time machine dream whisks him to Till’s infamous open casket funeral  He gets to hear the preacher’s passionate sermon and his mother’s unforgettable comments afterwards. Pictures and films of the actual events are shown on screens above the set. The play continues as an angry, educational cyclone jumping here and there for comments and insight.There is no clear-cut dramatization of the shooting, which is probably for the best since there are only conflicting accounts of what happened.

Real life provides juicy roles for the mixed race company of actors. Amir Randall as Trayvon brings innocence and honesty to the role of the teenager.  He can rap and dance too. Two lithe dancers, also dressed in hats and hoodies, usually accompany him, visually expressing the anger and confusion of the events. The dancers, Julian Darden and Stanley Morrison, at times appear to be terrific street dancers, and at other times, stars of a Jerome Robbins ballet.

Angel Brice portrays an impressive number of black women who embody a wide emotional range. Most memorable are her scenes as the aghast mothers, both Martin’s and Till’s. Brice makes the most of these quotes from the news. She also provides lighter moments including her totally unique rendering of Martin’s wifty girlfriend, and a hilarious morning show interview with Zimmerman’s vapid black lawyer, who is actually only an intern.

Martin’s sympathetic father is touchingly portrayed by Shabazz Green, who is also powerful as the Emmett Till preacher. Christopher David Roche has a field day with George Zimmerman, who has by now become a symbol of casual white racism. Zimmerman made a number of memorably inane statements after the trial and Roche recites these with relish. Donna Cherry is almost unrecognizable as she effectively morphs into the many white woman roles.   Michael Fegly plays the remaining white characters, most noticeably Zimmerman’s father and various comic characters.

That said, there is too much shouting. Chekhov once observed that an actor should shout only when he can find no other more inventive choice. If this could occur, the decibel level of the evening would fall, and those moments that really demand shouting would move the audience.

The setting by Parris Bradley is an effective stark gate on a large platform the serves as the gated community entrance as well as hundreds of other locales. Screens above the set announce the scenes, relate the various “tweets” that are strewn throughout, and allow us to see the real people and places. The hoodies are the work of Costumer Millie Hiibel who always lets us know which character we are listening to and which period of history we are observing. The lighting by Lee Evans and projections by SeifAllah Salotto-Cristobal make for a fast-paced assaultive evening. The direction and choreography are by co-author Rajendra Ramoon Maharaj.

This is a world premiere and the question naturally is: will The Ballad of Trayvon Martin take a place beside acclaimed public record docudrams such as Execution of Justice, or Gross Indecency?  At the moment, not by a long shot. There is ample, power, emotion, and outrage on display here, but it is not as effective theatrically as it might be. As Soto, and Mahraj, continue to refine the production, I offer the following suggestions:.

But enough of this. I’m off to my trunk to dig out my old “Freedom Theatre” T-Shirt. I plan to wear it for two weeks.

Running Time: 2 hours and 15 minutes, with an intermission. 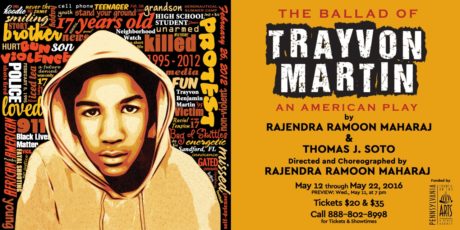 LINK:
Talking With 16 Year-Old Amir Randall on Playing Trayvon Martin in ‘The Ballad of Trayvon Martin’ at New Freedom Theatre by Henrik Eger.