Theatre Lab’s production of the multiple Tony Award-winning musical Titanic The Musical will easily win you over. Under the direction of Deb Gottesman and musical direction by Joshua Coyne, Theatre Lab’s most recent Creating a Musical Role class has taken-on a large-scale musical and blossomed. The students have created and performed high-quality entertainment with delightful characterizations, lovely singing, and final scenes that have a poignancy and a guilelessly misty-eyed wallop!

The Titanic production takes hold after a first few minutes as the diverse 30 member cast begin to let themselves become in-the-moment. The large ensemble, with different levels of theatre training before the Theatre Lab hands-on education course, worked together for several months sharpening their skills.

For those who may say, “I saw the movie, why see this musical edition of the Titanic saga?” Well, know that the musical not only predates that blockbuster James Cameron movie, but it is a rare visitor to the DC metro area. Notably, the Theatre Lab production provides a nicely honed human quality rather than rely on razzle-dazzle. In a number of scenes and musical numbers, the audience comes face-to-face to genuine emotions of characters representing people of different social classes during rapidly changing world times – all while they are on board the Titanic, an ill-fated ship-of-dreams doomed by the arrogance of a new class of the technology minded of the early 20th century.

Titantic’s Tony Award-winning music and lyrics are by Maury Yeston, and Tony Award-winning book is by Peter Stone. Yeston’s score is performed by Joshua Coyne on keyboard, with Cheryl Branham on keyboard II, and Billy Wolfe on reeds, provides all an audience needs to lets emotions fill them. The musical numbers in duets and big production numbers add emotional pull that run the gamut from happy to sad, full-of-wonder to full of dread, heart-breaking to heart-lifting generally with lovely, unfussy melodies. Well-accomplished and interesting choreography of her 30 Theatre Lab charges in the smallish set space is by Jennifer Cordiner.

With about 30 musical numbers, many scenes requiring movement of set pieces and props with a cast of 30, let me present just a few, and very personal, list of highlights:

I Give You My Hand:  Rick Gondelman & Anna Philips-Brown brightly present their characters.

Lady’s Maid: Julie Dixon & Company sing about what is maybe in America for them.

The Proposal/The Night Was Alive: Nicholas Miles (stoker) & Jack Posey (wireless operator) giving the audience a sense of who they are as men on the doomed ship

To the Lifeboats: Company with total abandon into the scene.

We’ll Meet Tomorrow: Company as the end of lives is near with sincere poignancy.

Epilogue/Finale: Company, brought moist eyes to the audience as the living are joined by the lost.

Julie Dixon and Chad Vann: she knows what she wants, and he is not so sure.

Last scenes and finales as the entire company provides shivers to the patrons.

To Sarah Boyd goes applause for her many well-documented technical skills and responsibilities, including Stage Manager. With the technical production work of the entire crew, too numerous to mention, let me say this;  I saw the Titanic as a ship, I felt the ship go down, my emotions were wrapped up in what was before me and my imagination.

Finally, a personal bow and then applause to Maury Yeston for hearing these lyrics from the song Lady’s Maid, at this particular time in America. Right on.

I will be a proper person
People will look up to me
…
I aspire to heights of glory
In the new world that can be!
In that grandest nation I’ll stand tall
Reach my highest hopes
Of all.

So, with most knowing the final fate of the “unsinkable” ship Titanic’s April 1912 maiden voyage, leading to over 1,500 lost lives of children, women and men, the Theatre Lab production is well-done storytelling with plenty of good room for audience imagination.

This Theatre Lab production gives patrons an opportunity to see performers we may readily see on larger stages in the area now or in the future, or we may one day find their names bolded in the pages of the Washington Post for their successes in the non-theatre world.

Theatre Lab’s Titanic is fascinating entertainment that showcases new talents while providing a sobering account of social strictures, arrogance and industrial and technological “progress” while depicting lives of honor and a number that are less so.  Just a second- is the early 21st century a doppelganger for the early 20th century? e shall see. 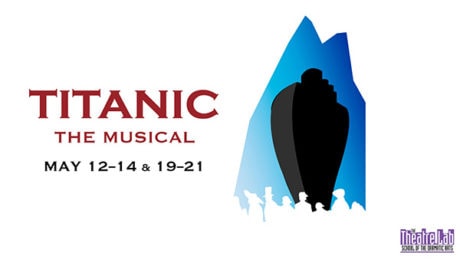