Los Angeles may be named after those who pride themselves in virtue and goodness, but NextStop Theatre Company’s production of City of Angels is a reminder that the citizens of Hollywood are anything but. Cy Coleman’s homage to the golden age of Hollywood, the cast and creatives over in this jewel box of a theatre have created a fast-paced world full with duplicity, absurdity, and (most importantly) sex.

Chronicling the drama of the real and “reel” worlds, the musical focuses on the struggles of Stine (Bobby Libby), a fiction writer who is attempting to adapt his novel into a screenplay for acclaimed director and producer Buddy Fiddler (John Loughney). In the film noir world of the film, private detective Stone (Ryan Burke) is hired by the beautiful Alaura Kingsley (Teresa Danskey) to find her missing stepdaughter Mallory (Mackenzie Newbury). Reality and fiction soon begin to blur as vows are broken, manipulations are discovered, and desires run rampant. Both Stine and Stone may not make it out alive.

City of Angels, while musically sensual and verbally sharp, requires so much from the cast and the artistic team that it is rarely produced. In differentiating from the color of real life and the black/white scheme of the film, all aspects of the technical elements must work in perfect synchronicity. The cast must balance dual roles as almost every character in Stine’s screenplay is based on someone in his personal life. While larger theatres have shied away from this production, NextStop rises to the challenge with pitch perfect aplomb.

With casts of this show typically capping at 30, Director Evan Hoffmann makes a bold move in halving that number and casting 14 in his ensemble. A high caliber cast remedies what could have been a glaring issue. Libby as Stine and Burke as Stone offer a dynamic contrast in the principle roles. Libby’s deterioration at the hands of movie making politics is stunning to see and Burke’s sleek and sexy swagger puts him on par with Bogart and Grant. Loughney as Buddy is a scene-stealer from start to finish as the absurd and tyrannical director. Katie Keyser as Gabbi (Stine’s wife) and Bobbi (Stone’s “One That Got Away”) makes her mark as she croons “With Every Breath I Take.”

Katie McManus as Oolie and Donna is a comedic and vocal master with her split-second reactions and her Act Two standout “You Can Always Count on Me.” Mackenzie Newbury as Mallory and Avril is the perfect 40s sex kitten with legs (and splits!) for days and a brassy, bright belt to match. Teresa Danskey as Alaura and Carla is a siren whose sexual nature is matched only by her ability to scheme. Every cast member brings something fresh and exciting to the stage to encapsulate the film noir feel of the work. And kudos to Musical Director Music Director Elisa Rosman and her six fine musicians, who played this fun score so well.

Hoffmann has assembled a crackerjack team to piece together the complicated puzzle pieces of this work. Hoffmann and Golden (in a combined effort) visually bring the audience into the 40s with a simple façade of doors that evoke both polish and grunge. Kristina Martin’s costumes provide the perfect dash of Hollywood glamour in both the colored and black/white worlds. The technical star of the show is the lighting by AnnMarie Castrigno. The small differences she finds in both worlds is the icing on the cake with her split-second transitions in “You’re Nothing Without Me” absolutely beautiful.

If we’re being honest, most of us will never be angels. Most of us will never be movie stars. That doesn’t mean we still can’t get lost in their world. City of Angels is the perfect homage to the time of the crooner, the gumshoe, and the femme fatale. You may not be able to meet them at Hollywood and Vine, but you certainly will find them in Herndon. 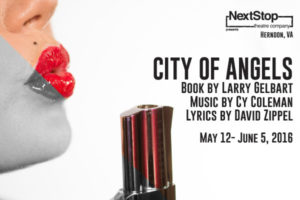