Love & Friendship opens with a sigh of regret from an unknown and unnamed narrator as one Lady Susan Vernon takes her leave of the Manwarings (pronounced as if that “w” was a boorish dinner guest one does not deign to take notice of). The film then assails us with a barrage of quick, witty visual and textual portraits of each person and location involved in this particular melodrama, so many that the device proves useless at providing information, even as it proves masterful at providing economical doses of wry observational wit; whether we retain it or not, the process is enjoyable.

Whit Stillman (director and author of the screenplay) deserves a great deal of credit for preserving the pace (a brisk 92 minutes), weight, and wit of Jane Austen’s lexographic universe (bibliographic? What’s the book equivalent of cinematic universe?). Love & Friendship, based on an Austen novella, races along from domestic crisis to domestic crisis as Lady Susan improvises her way through society life, getting by on charm, guile, and utterly shameless manipulation of social mores. Kate Beckinsale plays Lady Susan with agile grace and glowing good temper. She positively radiates security in the belief of the rightness of her actions, even when it appears as though she is not getting her way (though it rarely manages to appear that way). I suppose that I shouldn’t associate Beckinsale with her worst career mistakes (*cough*VanHelsing*cough*), but I was not expecting her to be so effortlessly charming and funny and perfect. Even more so because Lady Susan, unlike most of Jane Austen’s protagonists, is not the object of our sympathies, but a monstrously charming and delightfully seductive anti-hero who schemes rings around those who stand between her and what she has decided that she wants.

Lady Susan’s only match for guile and cunning is her American “friend,” Alicia Johnson, played in an impeccable deadpan by Chloë Savigny (a reunion for Beckinsale, Sevigny, and Stillman, who collaborated on The Last Days of Disco  waaaay back in the day).

It is not immediately obvious to the audience that Lady Susan is a Regency-era social Machiavelli; it only dawns on us as we spend some time outside of Lady Susan’s reality distortion field among the company of her in-laws Catherine DeCourcy Vernon, her brother Reginald, and eventually Lady Susan’s daughter, Frederica.

At first, we are allowed to see Lady Susan’s inner and her outer worlds (and are treated to her witheringly astute assessments of her adversaries). The more time we spend with Frederica, the more our allegiances shift to the DeCourcy’s and to Frederica, even as Lady Susan schemes her daughter’s hand to wealthy fool Sir James Martin (played with brazen comic abandon by Tom Bennett) now that Lady Susan has finally run out of private schools that she cannot afford to send her daughter to (Lady Susan does not deign to send money, even when they ask). 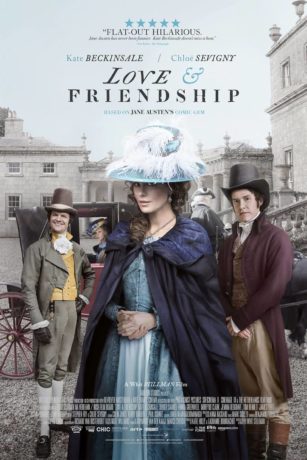 It would be a shame to spend any more time detailing the ins and outs and twists and turns of the plot of the film, which come thick and fast, because I certainly cannot do it as charmingly as Stillman and company accomplish the feat. It can be difficult to capture the airy brightness of Austen’s comedies of manners, the wit and speed and flash of it, but Love & Friendship rises to the challenge. The film does not linger over anything, but moves along laughing, by turns at and with us, with a razor sharp wit applied so precisely that though the wounds be deep, no blood appears to be drawn. This film skewers sentiment on a spit as Lady Susan turns humans into puppets at her mercy. Lady Susan is performing social calculus while everyone else is struggling with trigonometry. You can’t prevent Lady Susan from getting what she wants (just ask the cuckolded Lady Manwaring), you can only hope that she changes her mind about what she wants, even if you’re her best friend or her daughter, a truth the film drives home with it’s final image of Lady Susan’s arch, deceptively light, and subtly cruel smile.

Love & Friendship is playing now at the Landmark E Street Cinema and the Landmark Bethesda Row. Check your local listings.