Director\Writer William Dean Leary produces unsettling, lapel-grabbing work that addresses topical issues. In his previously written and directed, Forsaken Angels, Leary addressed sex-trafficking. In his latest originally written and directed work, kinK, Leary tackles the controversial world of bondage and discipline and the ramifications of when such a lifestyle goes too far. kinK, is a penetrating look into the wild side of sexual practices, and what happens when those practices turn dangerous. 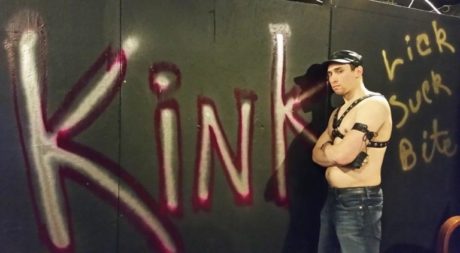 The show follows the aftermath of the death of the never-seen Eric, who died under unusual circumstances, apparently of autoerotic asphyxiation. (Or was it death at the hands of his part-time lover, the sadistic Ryan (Paul Davis)?) Eric’s death, five-weeks earlier, is ruled a suicide in court, creating all sorts of insurance-claim ramifications. It is Eric’s partner-in-life Cory (Jamie Brill), who while looking for the answers to the death of Eric, is blocked at every turn by Eric’s parents, who want the house and car they shared as a gay couple.

The stakes pierce the ceiling when the deceased’s brother, Leonard (Thuan Nguyen), appears in the bar and makes stunning reveals about his backstory and relationships. While Leonard’s original intent is to offer a deal from Eric’s parents to settle out of court, the sum of Leonard’s appearance is recruitment of the bar’s patrons to obtain revenge on probable murderer Ryan.

The play asks a series of questions as it progresses: Are there limits, in the bondage and discipline world and on the quest for justice? What are the dangers of open relationships? Can sex-workers have stable relationships? Is vigilante revenge ever justified? Does sex make a relationship? Why don’t more people stand in their sexual truth? Should the past stay the past?

After a sluggish opening few minutes, the cast rose to superb heights in the second act. The scene in which Cory’s “gang” confronts the accused, Ryan, was intense to the Nth degree. Finding himself “on trial” in a Kangaroo court, Ryan (the outstanding Paul Davis) dripped with dreadful arrogance—you’ll want to strangle him. At times, Ryan fired back acute accusations of his own, making him more than a mere two-dimensional villain.

Many scenes stood out. Brill and Nguyen’s tearful scene, expressing their loss of Eric was tear-inducing. Davis was as an incorrigible a villain as you’ll see anywhere. Tomlinson did a superb job speaking the truth in love, as the lovelorn Jeff. Koster’s comically homoerotic, high school football flashback was snicker inducing, and his insistence that “no one dies in this bar unless I kill him” was chilling. I loved Livengood’s Russian accent and escort-work philosophy. Douglass brought realistic intensity to his scenes.

Lighting Designer Stephen Beitzell effectively highlighted the characters’ monologues. The risqué costumes were expertly crafted by Dannielle Beitzell and Eileen Murray Kraft, and Leary’s set design put me in the middle of a bar that would be populated by these characters. Leary has produced a work that is not for the prudish and sex-negative.

See kinK and be prepared for a drama that severs and shreds the proverbial envelope.