Not that subjectivity expressed by human babble, i.e., talking, of which America’s logocentric culture continues to be so fond; but, rather, the subjectivity behind the mask each of us presents to the world. 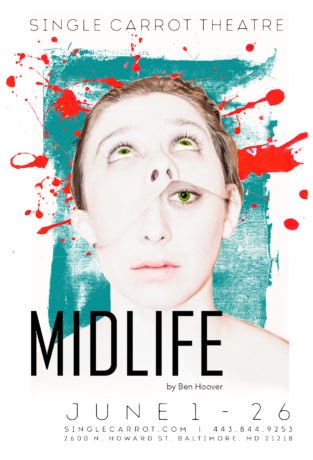 Single Carrot’s world premiere of Midlife does a great job capturing that interior space that is so much not a part of the theatrical present, except in glib, hip expressions of ironic asides.

Director Kellie MeCleary employs technology, from headphones that each audience member wears to listen in on the interior thoughts of the protagonist, Beck, played sincerely by Genevieve de Mahy, to live action/recorded action video feeds (creatively designed by Tom Cole) that give expression her memories, desires, and fears.

The interweaving of harmonious and discordant semiotic systems creates an effective and emotionally engaging metaphorical world for the audience. We enter it willingly; or, perhaps, more like Jonah going into his Whale, the play swallows us whole.

The problem with Midlife lies not in its strong suit, its subjective space, but in its everyday theatrical grist: its story’s externalities, i.e., its material reality, i.e., what exactly happens to Beck within her theatrical here and now.

It’s the articulation of that plot, in this most intricate of theatrical stories, that needs the exquisite touch of a craftsperson and that, too frequently, falls short of the mark.

Let’s start with the title: Midlife. Webster defines that concept as “the period of life from about 45 to about 64.”

Ms. de Mahy’s sincerity as an actress cannot make up for her lack of years and midlife experience. Now, if playwright Hoover created Beck as a 30-something, then the title is simply misleading (and this play doesn’t need anything “simply misleading”).

If, on the other hand, the production took the perspective that the character of Beck saw her middle-aged self as younger than her years, thus making her character younger and, thus, her acceptance of the downward slope of life’s narrative that much more difficult to take, then the script and its narrative should have supported that external versus internal discrepancy. And nothing immediately grabbed my attention.

Even Beck’s costuming, done by Katy Kincade, failed to aid the audience in understanding the nature of Beck’s age, or her employment in a white collar job, or her marriage of many years, etc.

Beck’s husband, John, played by the also youthful, and sincere, Evan Moritz, supported the younger version of the lead character. Their scenes revolving around the changes in Beck’s personality, though engaging, failed to clarify the larger issues surrounding their relationship.

Unfortunately, this youthful set up also supports an interpretation of events and the changes in Beck’s personality as demonstrative of a psychotic break, which would be okay, but it’s simply not supported by the script’s ending.

The production’s five Homunculi (derived from a 16th century theory that asserted that a small fully formed individual, a Homunculus, exists inside each spermatozoon) were played by Trevor Wilhelms, Kaya Vision, Elizabeth Scollan, Saveh Haerian, and Katie Hileman. These five performer played everything from circus performers to baristas to random loving couples. Their performances varied, in accordance with the degree of circus skills required, with Kaya Vision standing out as a circus performer.

Claire Schoonover plays MA, the older female threatening to take over Beck’s body: she does so with a combination of creepiness and scientific objectivity. Her sidekick, played by the aforementioned Trevor Wilhelms, takes weasel to a whole new level.

The work of Scenic and Lighting Designers Daniel Pinha and Helen Garcia-Alton, respectively, was more distracting than edifying.

By opening up the space to include not only the lobby door and the city of Baltimore, as seen through an open window, Pinha highlights a certain kind of interiority, but by not shaping that world around the specificities of Beck and her particular social realities, his sets did not give us an overall context through which our understanding of Beck’s changes might be better evaluated.

The lights, on the other hand, left certain scenes, which I wanted to see, in the dark and other scenes, which might have been better served by darkness, lit.

The rest of the design team for this ambitious production consists of Composer Griff Beheler, Movement Director Rebecca Free, Puppetry and Properties Designer Jessica Rassp, and Sound Designer Steven Krigel. Though each added to the overall psychotic effect of the show, their general lack of precision also added to the show’s shakiness.

“Sharper! Sharper!” I heard myself say in my head. “Precision is a virtue,” particularly when one is shifting from system to system, reality to reality, self to self.

And that is, in the end, the nature of theatre and acting: specificity and precision.

Ben Hoover has that rare distinction in that he is both a playwright and a scientist, of neurology. Although Midlife might have more in common with Carl Jung than neuroscience, its expressionistic proclivities offer both promise and danger.

Might the play’s externalities provide the necessary plot, character, spectacle to give clarity to its theme.

Running Time: 2 hours with no intermission.