To begin our 2016 Capital Fringe series of Previews, Bucky Mitchell introduces us to his show Before The Lights Go Up. 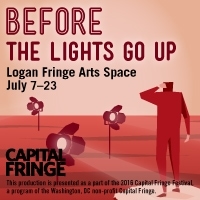 Joel: What is Before The Lights Go Up?

Bucky: Before The Lights Go Up is a story about first-time actor, Alex. After months of rehearsal, Alex finds himself in a state of panic as the time nears closer to curtain call on opening night. When he tries to seek advice from his fellow actors, they lead him down a comedic, yet poignant path on the importance of making choices. As the time races on and the pressure builds, what will Alex decide?

Why is the show so important for the audience to see?

Before The Lights Go Up is important for two very distinct reason. First, the play allows the audience to go behind the scenes and take a rare glimpse into the of the world of actors and the processes they go through before opening night. It’s more than meets the eye. Second, we make choices so quickly and casually that we rarely slow down and examine how difficult it is to actually make them. This play allows us to do exactly that. We get to see a pivotal choice play out in front of us.

Take us on the journey of writing the show. Where did you get the idea to write the show?

As a prior actor, I kept on reflecting back to how nervous I felt on opening night and I wanted to capture that in this play.

What does the title mean?

The title makes reference to what happens behind the scenes of a play. The play could have easily been called, The Dressing Room.

Introduce us to your cast.

Chris Hrozencik is a senior student studying performance for stage and screen at George Mason University. He previously took part in the Capital Fringe Festival with Artful Justice as Peter/Bobby. At GMU, he has participated in three productions as a wardrobe assistant, as well as acted in productions. His credits include: A Bright, New Boise (Will Cronin), The Mystery of Edwin Drood (Durdles/Mr. Nick Cricker), “The Merchant” (Eutychus).

Marlon Ross resides in the DC area and has studied at the Duke Ellington School of the Arts as well as the Studio Theatre Conservatory. Ross has been featured in shows including Jerry Springer The Musical at The Studio Theatre and Chocolate Covered Ants at Restoration Stage.

Howard Perry has an extensive background in theatre from doing the national tours of Dreamgirls and Grand Hotel to performing in Memoria with the Alvin Ailey American Dance Theatre.  He currently teaches at The Dance Institute of Washington, DC.

Jarrett Arnold is an artist, actor and high school science teacher. He teaches at The Field School in Washington, DC. He played Eisenring in Max Frisch’s play “The Firebugs” directed by Perry Schwartz for Montgomery College earlier this year and “Before the Lights Go Up” is his second play in the DC area.

Jaylene is currently enjoying her role as Reggie in Before the Lights Go Up.  Her previous roles include Babette in The Firebugs and Liat in South Pacific. While pursuing an MFA in Digital Art, she studied acting at the University of Oregon.  Jaylene is an accomplished visual artist and pianist. She currently works as a graphic designer and lives in Silver Spring with her husband Jarrett and two children.

Charlotte is a Shakespeare enthusiast whose dream is to someday play Lady Macbeth at the Globe in London. Her latest work includes Anne Page in The Merry Wives of Windsor (Shakespeare Opera Theater), Sebastien in Twelfth Night (District Players), and Phebe in As You Like It (Baltimore Shakespeare Factory).

Before The Lights Go Up plays from July 7-23, 2016 at The 2016 Capital Fringe Festival performing at The Logan Fringe Arts Space –  1358 Florida Avenue, NE Washington, DC.