In Part One of a series of interviews with the cast of Vagabond Players’ Moon Over Buffalo, meet Caroline Kiebach.

Joel: Please introduce yourselves and tell me why you wanted to be in the cast of Moon Over Buffalo? 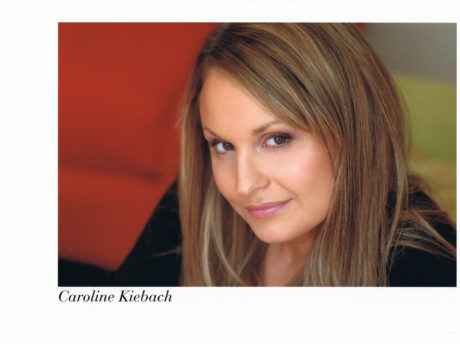 Caroline: Hi! My name Caroline Kiebach and I am a NJ/NY native actor relocated to the Baltimore area. I wanted to do Moon Over Buffalo because it’s simply the type of play that tickles my fancy. Lol …..It’s a comedic farce, with that I Love Lucy in & out of doors mayhem feel to it, & characters are constantly reappearing with new obstacles. As an actor, I feel confident with these types of comedies and I get to have a blast while performing in them. What’s better then that?! (Side note: I also reeeeeally wanted the chance to perform at Vag’s!)

Personal experiences? Um, well, I think I always bring a little bit of “me” to each character I get to play on stage. But the physicality of the show for my character in the Private Lives scene is a fun one. Personally, the last show that I performed in before Moon Over Buffalo helped prepare me for that type of “in & out of doors” energy that is needed throughout that crazy scene. And I’m VERY grateful for it!

Since the show opened, my performance has become more playful. I now get to really enjoy her & enjoy the moments on stage with my fellow actors. It’s like knowing the back of our own hands at this point. Which can make for a super fun performance.

Who do you play in the show and how do you relate to your character? Has your feelings for the character changed since the show began?

I play the character Roz (Rosalind) in the show. I can definitely relate to her and her own personal obstacles. I mean, aren’t we all just trying to figure out this thing called life? Lol And that’s what Roz is doing. Shes testing the waters.

Since the show has opened my feelings for Roz haven’t really changed.  I’m just learning how to enjoy her more and more and discover her little quirks that make her her. She’s pretty darn cool!

Some things that have not gone as planned during our performances would be costume pieces falling off or props falling over. One night Greg, who plays George (Roz’s father) lost his feather in his hat in our Private Lives scene. It fell onto the floor right before we were suppose to enter again with me chasing after him. Greg didn’t know that it had fallen onto the floor and there wasn’t enough time to tell him. So I quickly picked the feather up and then continued to chase after him with it in my hand waving it around frantically as Roz.  And it totally worked! The audience loved it because it made sense for the scene and it was an added psychical element.

The funniest moments for me while playing Roz are during our Private Lives scene and during Roz and Paul’s scene. It’s so interesting to hear the audiences’ reactions to them on different nights. It’s also so much fun to play into that.

What has surprised you about the audience reaction to the show and your performance?

Things that have surprised me about the audiences reactions to our show and to my personal performance is how invested they sometimes become with the relationship between Roz and Paul. I was told one night by an audience member that they were at the edge of their sets waiting for Paul and Roz to finally kiss. I never expected that. I didn’t realize the sexual tension and energy we actually are able to project onto the audience with that one scene in particular. I thought they would experience that as the characters were actually kissing.

Why should audiences come and see Moon Over Buffalo?

Audiences should come and see Moon Over Buffalo because it’s a really fun night out at the theatre! Get away from all the heavy political debates and social media for two hours and come laugh and enjoy yourself!

Why do you think Ken Ludwig’s play is so popular?

I think Ken Ludwig’s play is so popular because it’s a comedic farce. Who doesn’t love an over-the-top fast paced comedy?! I know I do.

LINKS:
Review: ‘Moon Over Buffalo’ at Vagabond Players by Lauren Honeycutt on DCMetroTheaterArts.

Meet The Cast of ‘Moon Over Buffalo’ at Vagabond Players: Part 1: Caroline Kiebach.