On June 26, 2013, when the Supreme Court announced its decision on the constitutionality of “The Defense of Marriage Act” (or “DOMA”), it was a unique moment for LGBT Playwright Kevin Michael West. A major event in American history had made a direct impact on his personal life.

He and his partner had often been subjected to all kinds of discrimination, both socially and personally. But the worst one of all was DOMA. West’s life partner (now husband) Ken was a foreigner. And although they were legally married in Massachusetts, DOMA prevented West from sponsoring Ken for a green card. For years, they lived in fear that Ken might have to leave the US, and they would be split apart forever.

West and his partner were both horrified by the suffering they had seen DOMA cause throughout the LGBT community. And West decided that his next play would focus specifically on “The Defense of Marriage Act.”

“I wanted to help people understand the unfairness and suffering that DOMA caused to ordinary gay Americans,” says West. “I wanted to give a voice to those victims, and to dramatize their struggles, their hopes, their setbacks, their dreams and, ultimately, their victories.”

The result was The DOMA Diaries, a new stage play that opens in Washington DC on July 7, as part of the Capital Fringe Festival. It is the story of three gay couples and the ways in which they struggle to overcome the obstacles that DOMA creates in their lives.

The play captures the grand sweep of American history through the lives of ordinary gay Americans. Along with two fictional (though fact-based) stories, West added a third plotline, this one based on his own personal experiences with DOMA, as one half of a bi-national couple.

From Joy Gerst:
Back in the 90’s I was privileged to perform in “Quilt, A Musical Celebration” (Foundry Players) to tell the story of the Aids Quilt that was going around the country to bring attention to the issues of the Aids epidemic. Now I am privileged again to be performing in The DOMA Diaries to help tell the story of DOMA and the struggles of the LGBTQ community to attain marriage equality in America. Both shows are poignant, touching, and both send the message that we are all Americans, equal, and entitled to the same Constitutional rights.

Renae Erichsen-Teal:
I believe the arts are the most powerful tool for changing hearts and minds, and I am proud to stand with the LGBTQ community and speak out for equal rights through this production. It is my hope that The DOMA Diaries encourages the message of love and inclusion across political and religious lines.

Nell Quinn-Gibney:
As a member of the LGBTQIA+ community, this show was very personal and very important for me to work on. It taught me a lot on issues that I thought I already knew about, but it also made the impacts of these issues so much more human and specific. DOMA was a shameful but important part of our history, and it’s one that I hope will never be forgotten as we continue to work for equality.

Steven Wolf:
Kevin’s script is a perfect balance of thought provocation and entertainment and I’m proud to be a part of this cast. For me personally it shows how far we’ve come, but also how far we must go to reach total equality. The day that everyone in this nation is treated on par with the same laws and common sense that my wife and kids are as a family is the day we can take a breath, relax, and know there is equality.

Chris Rohde:
The DOMA Diaries is a blessing for so many reasons: not only does it address real issues but it also provides fully realized gay characters, instead of the caricatures usually presented. Working on a play in a time when it is so immediately necessary, is why I am passionate about the theater.

Garrett Matthews:
This is the first role I have had the privilege to play a homosexual man. I have kissed several talented female actresses with the straight romance roles I have played, but never a fully realized homosexual human being. Which is empowering as not only an actor but as a gay man as well. Then adding another layer with the horrific Orlando Massacre it seems this piece of work came at a needed time; to remind everyone of how far the LGBTQ community has come and how much farther we have to go. Love is the story, love is the message and love is the answer, every time. 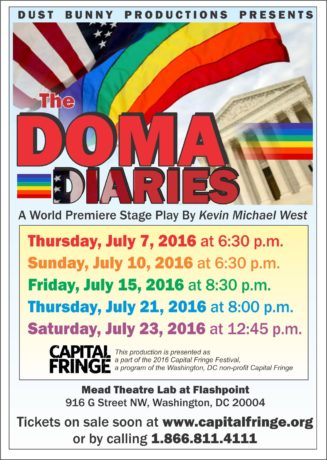 Performances of The DOMA Diaries will take place on:

All performances will take place at: 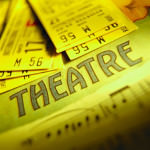