In Part Three of a series of interviews with the cast of Vagabond Players’ Moon Over Buffalo, meet Michele Guyton.

Joel: Please introduce yourselves and tell me why you wanted to be in the cast of Moon Over Buffalo? 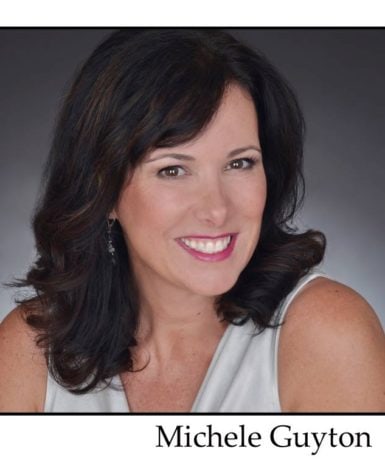 Michele: In “real life” I am a mom of three who has been involved in community theater in Baltimore for almost 10 years. After a serious surgery and medical recovery, I decided to embrace my creative side and worked up the courage to walk into an audition cold! Since then, I’ve been constantly  active in multiple local theaters(the stage is indeed addictive). I have a PhD in Psychology and I work as an advocate for kids with disabilities through the Tourette Association of America and as a member of the State Board of Education. It is important to note for this interview that I am also happily married to the leading man of the play!

My husband (and a few theater friends) actually encouraged me to audition for Moon. I am usually drawn to musicals but read the play and not only was it laugh-out-loud funny, it sounded so “us.” The combination of Vagabonds, working with John Desmone and playing opposite my favorite leading man was irresistible!

I have been married for 25 years to a man who is brilliant, quirky and charming but certainly not without a fault or two (though none nearly as serious as the ones portrayed in the play!) I couldn’t imagine life without him- so it was very easy to identify with Charlotte! I think the fact that we are both involved in theater also brought a lot to the understanding of their dynamic.

Charlotte has actually evolved to be more like me since the beginning of rehearsals when I struggled to make her into something different. She has softened a bit and become more vulnerable, though she can still throw a punch!

Who do you play in the show and how do you relate to your character? Has your feelings for the character changed since the show began?

I play Charlotte Hay, an aging actress married to George, who in her own words: “gives her a pain” – I believe that I can relate both to her character and to her dynamic with George in unique ways because of our real-life relationship, and in some ways she is definitely an exaggerated version of myself. The chemistry between us is real and sometimes I wonder if the audience isn’t getting a little too much of a glimpse inside our own bedroom (the sexy sword fight for instance)!

I have grown to really like Charlotte. I think she may forgive George a bit easily, but I like that she has both strength and emotional vulnerability. It also isn’t easy to be a woman “maturing” in theater!

Actually this has been a very smooth process. Everyone associated with the production has been professional and really lovely to be around. John is a terrific and easy-going director, which sets the tone, but I really just think we stumbled into a particularly pleasant theatrical situation.

Surprises? I didn’t expect to love the sword fighting as much as I do! The most unpredictable and dangerous part of the play is when I kick George in the groin. I get it right about 2/3 of the time. The other 1/3, I am glad that he is married to me and not someone else! It was only funny the first time I missed!

What has surprised you about the audience reaction to the show and your performance?

It isn’t really surprising at all, knowing this cast, but in the words of Sally Fields, “They like us, they really like us!” I think a lot of folks recognize their own marriages in the play and that resonates with them! I was a little intimidated by the fact that I was doing a play rather than a musical and so the positive reception has been very special to me. We also didn’t have any preview audiences and so the amount of laughter during the performances was surprising and impressive! In is also very interesting to see what different audiences find the most hilarious because that varies a lot by performance.

My biggest surprise is that audiences are not lining up outside the door and fighting for tickets. It is a great show!

Why should audiences come and see Moon Over Buffalo?

It is VERY funny! It is very well-done! Each of the actors brings something remarkable to his or her part. Greg is truly amazing in his drunken and very physical portrayal of George, Jess is sweet-as-sugar as Eileen, Richard is suave and debonair, Jim is handsome, cool and droll as Paul, Henry is so creatively comical as Howard that it is almost impossible to keep a straight face opposite him! Caroline brings terrific comic energy to Rosalind and Carol is a Mother-in-law to be reckoned with as Ethel! The set and costumes are beautiful! It is in fabulous Fells Point! I honestly can’t think of a better way to spend an early summer evening! You will not be disappointed!

And there is a sexy sword fight!

LINKS:
Review: ‘Moon Over Buffalo’ at Vagabond Players by Lauren Honeycutt on DCMetroTheaterArts.

Meet The Cast of ‘Moon Over Buffalo’ at Vagabond Players: Part 1: Caroline Kiebach.

Meet The Cast of ‘Moon Over Buffalo’ at Vagabond Players: Part 2: Jess Kim.