“The first time I played through the score, I was struck by its beauty and shocked that it was written twenty years ago– the message is still relevant now, and I knew the story needed to be told,” says Mandee Ferrier Roberts, the music director for the world premiere of The Missing Peace by Ron Melrose.

Ron Melrose is a Broadway music director best known for his work on Jersey Boys, The Scarlet Pimpernel, and Dr. Zhivago. However, For a decade in the late 1980s to 1990s, he left commercial theatre and served as music director at All Angels’ Episcopal Church on Manhattan’s Upper West Side. From that experience, The Missing Peace was born.

As Ron describes, “I had become painfully aware, during my years as a church musician, that the accepted symbology of the godhead was tilted toward the male… a trinity made up of a father a son and a bird/spirit. Listening to sermons that spoke of this as the ‘family’ on which earthly families should be modeled, I always found myself asking ‘Okay. But if the holy grouping is a portrait of a family, where’s my mother and my sister?’ I spent an odd month describing myself as a quintitarian christian, trying to imagine a holy family of father, mother, sister, brother, spirit. And then I started to write.

The initial concept was a no-brainer:  a Joseph-Campbell-perfect grail journey, with a female hero. There would be all the elements: the unlikely hero, the gifting for the journey, the crossing the water, the vanquishing of some evil or wrong, the returning from the journey, and the transformation both of the hero and the hero’s land/culture/world. I knew I wanted an all-female cast… I wrestled back and forth between a cast of five and a cast of one (five is the “magic number” for this piece), and finally decided on writing it as a one-woman show.”

“Ron has really crafted something special,” says Ferrier Roberts. “It takes place in a mystical “Celtic” land in a dystopian patriarchal society (think Margaret Atwood’s The Handmaid’s Tale). We follow Brianna as she grows from young girl to woman while searching for her mother and healing her land from drought. Along the way she has encounters with her brother, a goat woman, a ferryman, a dragon— all voiced by the same actor.”

Christine Demuth, the actor in The Missing Peace describes the process as “challenging and really exciting. The characters are amazingly well-written and they all change and evolve throughout the show. I feel a huge sense of responsibility to bring their individual voices and emotional arcs to life in a truthful way. It is such an original piece- I’ve never seen or worked on anything like it and I really think it’s going to be a unique musical experience for our audience.”

Ferrier Roberts describes how she has orchestrated the musical for four musicians: “Ron’s Celtic inspired music takes the audience on an emotional journey with melodies and motifs that develop character and establish setting. I’ve orchestrated the music for flute, violin, drum and piano.” Ferrier-Roberts will play the piano/keyboard, with Karina Carter (flute), Kris Miller (violin), and Darcy Nair (percussion) rounding out the band.

The production is directed by Kelly Williams Carlson and produced by StillPointe Theatre of Baltimore, a theatre dedicated to producing new musicals.

The Missing Peace
Words and Music by Ron Melrose 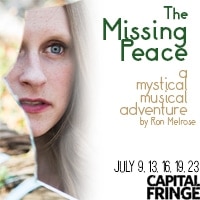