The rumors are true. After months of speculation, BRYCE confirmed he will be gracing the 2016 Capital Fringe stage with a brand new show BRYCE: Hydrogen Blonde.

After a successful debut at The Studio Theatre at American University in Fall 2014, the 23-year-old singer took an almost two year performance hiatus to work on this show. Perfection is simply not written overnight. BRYCE spent a lot of time in the studio with songwriter Julia Kaufman to come up with six incredible new songs for this show along with some familiar classics. There is a little something for everyone and BRYCE knows the Capital Fringe audiences are ready to party.

This show will feature new choreography by the one and only Sara Herrera who effortless brings life to BRYCE’s infectious music. The show also features dancers Nia Calloway (who was also in the original Studio Theatre production) and Z’ane Davis-Smith. Hydrogen Blonde will also include an appearance by HilMaMa of the Abervez and nightclub worthy lighting design by Tyler D Dubuc, Production Designer.

You might have seen him making an appearance at the 2016 Capital Pride Parade riding in style down 14th street with his crew or maybe at a local hang out like Nellie’s Sports Bar, Number 9, and on the rare occasion Showtunes at JR’s, but you will not want to miss BRYCE’s limited five night engagement at the Trinidad Theatre – Logan Fringe Arts Space this July. The 45-minute nonstop pop concert will be something Fringe has simply never seen before.

Tickets for BRYCE: Hydrogen Blonde are on sale now. Packages on the opportunity to meet BRYCE, VIP treatment during the concert, and autographed memorabilia are available at HERE: 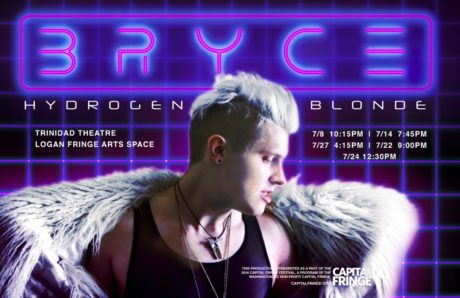