Science-lab rivalry turns deadly in the race to build the perfect robot. Hidden passions explode as artificial intelligence blurs the border between machine demolition and murder.

Two cybernetics students destroy a robot built by a rival team, and host a video-game party amidst the wreckage. Dial R for Robot explores the origins our moral systems and how they adapt with the rise of thinking machines. Audience members interact with the show through their mobile phones, choosing video-game roles for the actors, and making music with the band.

This world premiere features live music by world-groove-jazz band Djesben, with direction by Chris Griffin of The Round World, and stars two members of the Baltimore Rock Opera Society (BROS), plus DC rock/soul/reggae icon Caz Gardiner. The tunes range from cinematic textures under projected images, to driving funk-rock songs powered by our Robot Chorus. 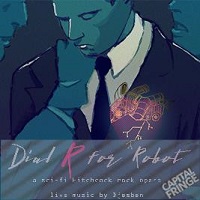 Djesben is a world-groove-jazz trio playing jazz standards, bebop, bossa nova, and original tunes influenced by music from around the globe. Their unique instrumentation includes hand percussion, electric dulcimer, and the Chapman Stick, a 10-string instrument filling the roles of bass and guitar.

Capital Fringe brings independent theatre, music, art, and dance to the DC audience with cultural events throughout the year, including the month-long Fringe Festival held each July.