It’s hard to imagine what to expect at a cabaret debut from a television actor turned Broadway performer turned television game host. Jane Lynch—who some know as Sue Sylvester from the hit-television show Glee, as Miss Hannigan in the Broadway revival of Annie, or as the host of Hollywood Game Night—delivered a performance as varied and exciting as her long and diversified career from the screen to the stage.

On Friday evening at the John F. Kennedy Center for the Performing Arts’ Eisenhower Theater, as part of the evening began with a rousing opening performance from the Tony Guerrero Quintet, who would accompany Lynch and other performers throughout the night. Joined by Mark Visher on woodwinds, Matt Johnson on drums, David Morgan on keyboard, and David Miller on bass, the quintet’s namesake Tony Guerrero energized the audience—his trumpet blaring—to a few iconic, timeless hits and beginning the comedic musical journey down memory lane. The Louis Armstrong classic “When You’re Smiling” perfectly showcased the band’s individual talents and how, working collectively, they perfectly set the stage for Lynch.

To further invigorate the crowd, Tim Davis, who arranged the music on Glee, performed a few numbers that showcased his smooth and sophisticated vocals. Davis opened with Frank Sinatra’s “Fly Me To The Moon,” capturing the audience’s undivided attention and bringing us to the bold 1950s era. Davis perfectly blended a classy cabaret style with stunning vocals. True to the overall musical-comedy theme of the show, he concluded with a song that he wrote for the U.S. Open, hilariously entitled “Take Another Swing at Love.”

The Tony Guerrero Quintet and Tim Davis perfectly built up anticipation for Lynch, who came out to rousing applause as she performed the nonsenical “If Wishes Were Rainbows, So Am I.” Lynch moved straight into a seductive jazz number, “Slappin’ the Cakes,” which she boldly and amusingly proclaims is one of her favorite jazz numbers. Lynch ups the ante even further by inviting Kate Flannery from The Office on stage to join her for a “few songs” (she joins for the entire remainder of the show). The two begin with a riotous and well-choreographed rendition of Irving Berlin’s “Mr. Monotony.”

The next portion of the set was my personal favorite: the folk section. Lynch starts with “Skeletons of Quinto,” complete with a rain stick expertly played by Flannery for dramatic effect.  The trio—Lynch, Flannery, and Davis—then performed a hilarious rendition of “Blood on the Coals.” Lynch offered a hilarious introduction of the song, proclaiming that folk singers rarely get enough credit, but that this song in particular ought to be more widely admired, especially because it combined the two timeless themes of folk music: coal mines and train accidents. The song, which details a train accident involving coal miners, is a hilarious caricature of folk music. The trio then joins for a perfectly-harmonized performance of “Rose Marie” followed by a medley of hilariously-bitter love songs.

In truly irreverent Jane Lynch-style, the set list then takes a wild turn with a song “for the kids”: the raunchy “Anaconda” by Nicki Minaj. Lynch does not shy away at all from the lyrics, twerking and rapping reminiscent of the over-the-top style of Nicki Minaj. Finishing with a sentimental rendition of Willie Nelson’s “The Party’s Over,” Lynch dispenses with the formalities—telling the audience to “sit back down” when leaping to their feet for the standing ovation—and launched immediately to her encores.

In the first part of the encore, Lynch leads with a hilarious medley of “Songs That Made Us Cry As Kids,” which included a heart-felt delivery of her personal favorite: “Puff the Magic Dragon.” As her second encore, Lynch finished with “Go Ask Alice”—an anecdote of Lynch’s role in The Brady Bunch Live. 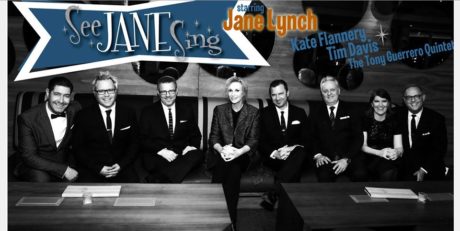 LINK:
Magic Time!: ‘A Fan Chat with Jane Lynch’ Who is Birchmere-Bound on March 24 and 25th.