Set on December 4, 1956, when an extraordinary twist of fate brought Johnny Cash, Jerry Lee Lewis, Carl Perkins, and Elvis Presley together at Sun Records Studio in Memphis for what would be an iconic jam session, Million Dollar Quartet dynamically revitalizes that legendary December night with an alluring account of broken promises, secrets, betrayal and celebrations that is both poignant and engaging.

The co-authors of the musical, Colin Escott and Floyd Mutrux, imagine the four rock-and-roll pioneers, who each got his recording start from Sun Records owner Sam Phillips (Brit Herring), arriving at their impromptu studio session with a mix of assorted agendas: Presley (Travis Artz), whose contract Phillips had sold to RCA, is reflective and nostalgic, yearning for the simplicity of his Sun Records days;  Cash (Austin Wayne Price) is anxious and guilt-ridden since he is about to sign a contract with another record company;  Perkins (James Bock) is embittered and resentful, as his career was derailed by a terrible automobile accident and the fact that Presley’s cover of Perkins’ big hit “Blue Suede Shoes” has overshadowed Perkins’ original recording;  and, Lewis (JP Coletta), who has yet to record his first hit, is flamboyant and enthusiastically egotistical.

Reviving the electrifying era with smash-hit sensations, featuring a spectacular score of rock ‘n’ roll, gospel, R&B and country hits, performed live onstage by a superb team of actors and musicians, the jukebox production showcased 22 hit songs including: “Blue Suede Shoes,” “Fever,” “Who Do You Love?,” “Great Balls of Fire,” “Hound Dog” and “I Walk the Line.”

Musical Director Amy Jones adeptly hones the skill set of a fantastic cast portraying the legendary quartet, accentuated with the narrative ease of Phillips and the sultry, Siren-like sounds of Dyanne (stunningly played by Bella Muller) to amplify the storyline, each member of the ensemble was convincing in their respective roles – each held their own, individually and collectively.

Standout performances were spearheaded by JP Coletta who, as Jerry Lee Lewis, stole the scene at nearly every opportunity with his distinctive presence, hot-temperament and over-the-top bravado throughout, particularly with his rip-roaring, piano-standing moves during “Whole Lotta Shakin’”.

Explosively vibrant and entertainingly informative, Infinity Theatre’s Million Dollar Quartet is a toe-tapping, euphonious extravaganza and will surely appeal to any music fan who wants to delve and discover the creative commingling of country and rhythm and blues sounds that helped give birth to rock. 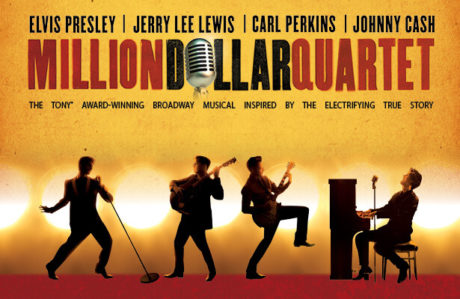 Million Dollar Quartet plays through August 7, 2016 at Infinity Theatre Company performing at The Children’s Theatre of Annapolis Complex – 1661 Bay Head Road, in Annapolis, MD. For tickets, call the box office at (877) 501-8499, or purchase them online.