A droll and inventive take on moviemaking, The Jaws Project mixes fact, fantasy and some show biz speculation to make a highly enjoyable comedy.

Today, most people remember Jaws as one of the biggest blockbusters of the seventies, as well as the movie that established Steven Spielberg as one of Hollywood’s top directors. But the movie’s road to success was a troubled one: the production went way over budget, and filming dragged on for three months longer than planned (largely because the mechanical shark kept breaking down). And with every day of shooting, the residents of Martha’s Vineyard, where the movie was filmed, grew testier and testier. Sure, having movie stars in your town is nice, but not when the film crew has commandeered most of the parking spots. 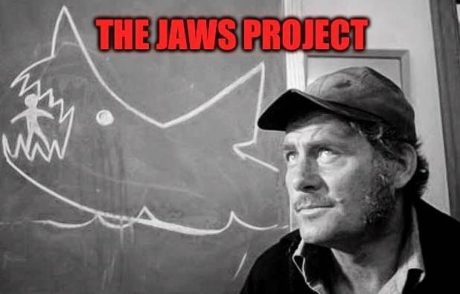 The Jaws Project is set in Martha’s Vineyard during the film’s production, and follows Brian, a hapless Production Assistant who spends his days doing mundane tasks like pumping fake blood for a shark attack scene. Brian spends his free time at a local bar, where he tries to impress Marjorie, a pretty bartender, by telling her that he’s the movie’s Assistant Director. That lie soon snowballs, and before long, Brian is rushing all over the island, trying to save his reputation, his job, and the movie – and not necessarily in that order.

He also tries to smooth tensions between the insular Vineyard community and the laid-back Californians who have taken over the town for the summer. And on top of all that, he’s still trying to win over Marjorie, who may or may not see right through his line of bull.

The Jaws Project was co-written by its three performers: Robert DaPonte, who plays the frantic Brian; Mary Tuomanen, as the skeptical Marjorie; and the versatile Sam Henderson, who plays all the other characters – everyone from the earnest mayor to a guitar-playing hippie to a soft-spoken Spielberg. (Tuomanen and Henderson do terrific Massachusetts accents; they make “shark movie” sound like “shock movie.”)

There are a lot of funny lines, but the actors are more concerned with constructing believable, richly detailed characters. (You don’t need to have seen the movie to follow the action – but if you have seen it, you may recognize some sly, discreet quotes from the movie script.)

The Jaws Project is terrific while it lasts – but it doesn’t last long enough. Running less than an hour, it seems at times more like an extended sketch than a play. While Brian and Marjorie are appealing characters, I’d like to learn a lot more about them. Some plot elements that are only dealt with briefly – like Brian’s duties trying to keep the movie’s star, Robert Shaw, sober – could be enthralling if they were fleshed out more.

Presented in a cabaret setting amongst tables in the third floor Skinner Studio at Plays and Players Theatre, the show has an informal, improvisatory air and a seamless, lightning-fast pace. (No director or technical crew members are credited.)

The Jaws Project was workshopped earlier this month in New Hampshire, and this week’s Philadelphia run marks the play’s first public performances, so its development is bound to continue. But what DaPonte, Tuomanen, and Henderson have come up with so far is quite promising – a cheerful look behind the scenes of a movie that was anything but cheerful.

Running Time: 50 minutes, with no intermission. (Grab a drink at the third floor bar before the show starts and bring it to your table.)

The Jaws Project plays through July 4, 2016 in the Skinner Studio at Plays and Players Theatre – 1714 Delancey Place in Philadelphia, PA. For tickets, purchase them online.