They’re eager. They’re excited. They’re budding playwrights. Oh, and some of them are retired. Five local playwrights, somewhat older than most of their fellow Fringe artists, are staging their first Fringe production. The playwrights, known as the Gang of Five, met at the Writer’s Center in Bethesda and have been talking about doing Fringe for years. Well, they’re finally doing it!

PowerPlays includes five short plays that explore how we win, lose, and try to control the truth in our relationships. 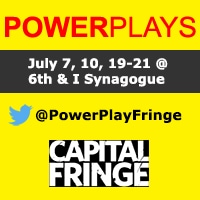 PERFORMANCES ARE IN THE SOCIAL HALL AT THE 6TH & I Historic Synagogue.

About the Gang of Five:

The Gang of Five includes playwrights Marilyn Bennett, J T Caruso, Dimitri Neos, Michelle Rago, and Sarah Dimont Sorkin. The Gang of Five is a group of playwrights who support each other in the development of new plays. PowerPlays production will be directed by Ritchie Porter.