The 20,000 square foot space is available for local performing and visual artists and organizations to utilize for rehearsal, theatre performance, concert, gallery, meeting, and studio/shop workspace.

The opening, originally planned for December 2015, was delayed for seven months due to unexpected repairs necessary for occupancy. While Landless initially planned to occupy a 12,000 square foot former church space, the company ultimately landed in the larger former Hobby Town space next door.

“This is an experiment for our company,” said Artistic Director Andrew Lloyd Baughman. We need studio space for our MetalTheatre work in DC and other cities, but wound up with a lot of extra space. We’re opening it up to artists in the Frederick community and hoping to see the local artist and patron community embrace this thing and keep it going. Frederick has been without a performance venue for small professional and amateur theatre groups since the Frederick Cultural Arts Center shuttered in 2012. There is also local demand for a live music venue, band rehearsal space, and visual art studio space. The East Street Arts Center features a 100 seat performance venue, a scene shop, a classroom/meeting space, a band rehearsal room, and large flexible art gallery/event space. It’s a non-traditional space for DIY art.

The inaugural production will be held the weekend of July 8th, when DC’s Tasty Monster Productions presents their acclaimed family-friendly original play FERDINAND.

Landless is planning summer productions of the hit Broadway comedy SEMINAR by Theresa Rebeck (July 29th-August 6th), a concert staging of NINE THE MUSICAL (August 12th and 13th), and a preview of the Landless’ premiere MYSTERY OF EDWIN DROOD [SYMPHONIC METAL VERSION] (August 20th and 21st).

“We are actively seeking new artists and companies to produce in the space,” said Baughman. “After our initial efforts to ‘jump start’ programming this summer, we’ll need to book local groups and artists.”To that end, Landless is hosting a unique “Cast The Production” 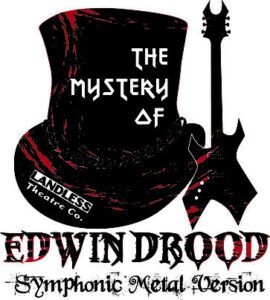 Open Call audition for actors on Thursday, July 7, 7-10PM at the East Street Arts Center (919C N. East Street, Frederick). Actors are invited to present a song and/or 1 minute monologue. A group of Frederick-based directors and playwrights will be selected to watch the auditions and pitch a play or musical for 2016 production based on the pool of available talent. Sign up for actors begins at 7 PM. Directors and playwrights may apply to audit by sending a resume and email of interest to abaughman@landlesstheatrecompany.com.

“This is not your Grandma’s Arts Center,” said Baughman. “We’re going to redefine your notion of ‘Arts Center,’ and then kick it up a notch.”

For more information about The East Street Arts Center, visit landlesstheatre.com, or email abaughman@landlesstheatrecompany.org to get involved.

‘Their Metal Will Be More Than Tested’: Landless Theatre Company Announces Development of ‘The Mystery of Edwin Drood (Symphonic Metal Version)’ by Andrew L. Baughman.

“What, Mr. Todd, What is that Sound?” Arranging The Prog Metal Version of Sweeney Todd: Part One: Andrew Siddle.

“What, Mr. Todd, What is that Sound?” Arranging The Prog Metal Version of ‘Sweeney Todd’: Part Two: Andrew Lloyd Baughman.