Annapolis Summer Garden Theatre’s production of Rent, celebrating the 20th anniversary of the musical’s Broadway premiere, is a powerful, heartfelt, and entertaining celebration of creativity and youth. With book, music, and lyrics by Jonathan Larson, and directed by Andy Scott, it follows a group of young artists and friends squatting in a New York apartment building, struggling to create and love in what often seems impossible circumstances. Mark (Tim German), an experimental filmmaker always carrying an old-fashioned video camera, narrates the show, participating in the action while observing from a distance; he will have to deal with the possibility of selling out, and what that means. 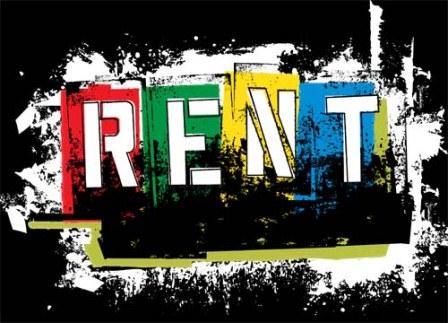 There are several love stories in this show, performed by a first-rate cast. The first is between musician Roger (David Colton) who in “One Song Glory” dreams of writing one perfect song, but can’t get past trying to tune his guitar, and Mimi (Athena Blackwood), an exotic dancer with a drug addiction. Their connection is immediately electric, although difficult; at their first meeting, Mimi asks Roger to “Light My Candle,” ostensibly to keep warm since she has no heat, but there’s obviously more going on. Mimi is sexual and passionate, intertwining with Roger almost from the very beginning. As they sing later, both have their baggage and pasts that make their relationship complicated. Indeed, when they first meet, Mimi reminds Roger of a dead girlfriend, and Roger reminds her of her father. Their love isn’t easy, but it’s beautiful to watch, and Colton and Blackwood play the relationship perfectly, with drama and concern mixed with affection.

The second love story is between Angel (Nicholas Carter), a tall drag queen who enters the group’s Christmas party wearing a Santa-Claus like robe, with gold stockings and big, black boots, and Tom Collins (Christian Gonzalez), a former computer science professor who uses his skills to help out with money. They meet when Angel helps Tom after he’s been beaten up, and they have an instantly flirtatious connection. Angel is witty and flamboyant, while Tom is slightly more serious and subdued, but they make a wonderful couple; as they sing in “I’ll Cover You”, “I think they meant it/When they said you can’t buy love/Now I know you can rent it.” They go through incredibly painful times as well, which can be tough to watch, but their love is strong and survives even that. Their chemistry

Maureen (Loghan Bazan) and Joanne (Andy Greenwald) fill out the final couple. Maureen is Mark’s ex, a performance artist and protestor, while Joanne is an activist for the homeless. Theirs is a tempestuous, argumentative relationship, always on the verge of collapsing. As they discover while singing “Take Me or Leave Me”, Joanne is jealous of the attention Maureen gets, while Maureen is tired of coming in second to Joanne’s various causes. Greenwald’s performance piece, “Over the Moon”, on the plight of the homeless, is both a hilarious parody, as well as a heartfelt plea for the cause. It involves Christmas lights and a cowbell, and she gets the audience to moo along with her.

Matthew Walter rounds out the cast as Benny, Mark’s friend from college and the owner of the building. He makes a terrifically complicated antagonist, eager to make money from his real estate holdings, while still wanting to honor his friendships. He also steps up to help Mimi when she needs it.

The choreography, by Casey Lynne Garner, is excellent, with movement and dance flowing from much of the songs. Mimi has a symbolic dance with her dealer that captures her struggle between wanting to stay clean and her need for the drug. “The Tango: Maureen” has an amusing dance with Bazan and Greenwald as they sing about their mutual girlfriend’s foibles; they do a competent tango with Greenwald taking the lead.

Jeff Huntington has done a terrific job as Scenic Artist. The backdrop is covered in graffiti of images and phrases, such as two heads kissing, one angel, one devil, “What will you be remembered for?” and “Silence = Death.” Keith Haring-inspired figures are on one wall, in “see no evil, hear no evil, speak no evil” poses. It helps to place the musical right into New York during the 90s. And Props Designer Kelsey Crockett gets the details right with the tables, chairs, and electric wires in evoking the starving artists’ lives.

Much of the power of this production comes from the songs, which the cast sings beautifully. “Seasons of Love” is a harmonious and lovely evocation of passing time, while “La Vie Boheme” is a gloriously pun-filled song about creativity, art, and eccentricity in the face of opposition. “What You Own” has Roger and Mark debating whether to follow their dreams or take the easy way out. “We’re Okay” is a funny look at Joanne literally juggling work, family, and love as she handles several phone calls at once, trying to reassure everyone that everything will work out. Paige Austin Rammelkamp is wonderful as Musical Director, and handles the music brilliantly as Conductor. The band is onstage to the left, under the stairs to a balcony.

Director Andy Scott puts together all the elements in this show. With so much movement and action going on, the cast works together smoothly and effortlessly. One clever turn in this production is Mark’s camera hooked up to a screen onstage, so that the audience sees in real time what he records. It is a testament to everyone involved in that they make this musical seem easy.

Everything comes together in Annapolis Summer Garden Theatre’s Rent, making it a fun, heartwarming evening under the stars. At once tragic and joyful, Rent shows the importance of seizing the moment and holding onto love no matter what. It’s much worth seeing!